The Legal Power to Launch War
Who Decides? 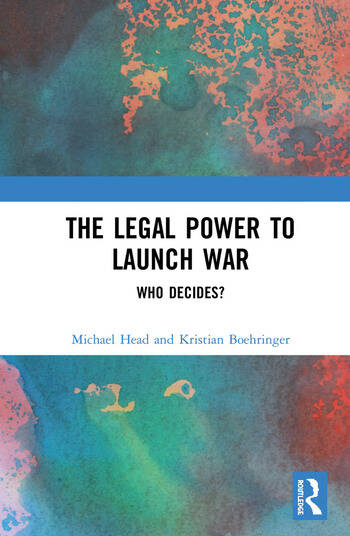 The Legal Power to Launch War: Who Decides?

The issue of who has the power to declare war or authorise military action in a democracy has become a major legal and political issue, internationally, and is set to become even more pertinent in the immediate future, particularly in the wake of military action in Syria, ongoing wars in the Middle East, and tense discussions between the United States and its allies, and Russia and China.

This book comparatively examines the executive and prerogative powers to declare war or launch military action, focusing primarily on the United States, Britain and Australia. It explores key legal and constitutional questions, including:

In addition to probing the extensive domestic legal consequences of going to war, the book also reviews various proposals that have been advanced for interrogating the power to commence armed conflict, and explores the reasons why these propositions have failed to win support within the political establishment.

Michael Head is a professor of law at Western Sydney University, Australia.

Kristian Boehringer is a senior lecturer in business law at Torrens University, Australia.

Even in the face of express constitutional restraints or legal controls, democracies have stumbled into, and conducted, wars using vast executive powers.  By reference to the recent experiences of the UK, USA and Australia, the authors have traced the serious dangers of removing democratic checks on war making at the very time when they are needed most.  In the new age of nuclear modernisation for first strike strategies this is a timely and worrying exploration of national war powers.  If the courts and the people cannot exert effective restraints, how does one adapt ferocious modern weapons and the need for speedy action to preserving controls over unbridled power with catastrophic potential?  This is the dilemma explored by this work:  a question that we cannot afford to ignore.

Hon. Michael Kirby, AC CMG past Justice of the High Court of Australia and chair of the UN Inquiry into Human Rights Violations in North Korea.

Michael Head and Kristian Boehringer have written an important and accessible book that demonstrates that wars by the US, UK and Australia in the name of democracy are actually launched by, and prioritise the interests of, elites in ways that make a mockery of democracy. This study deserves to be read widely and will generate justified scepticism about 'democratic' calls to war.