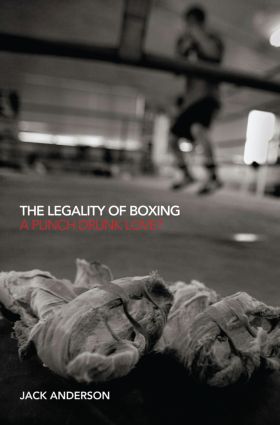 The Legality of Boxing

The first book of its kind dedicated to an assessment of the legality of boxing, The Legality of Boxing: A Punch Drunk Love? assesses the legal response to prize fighting and undertakes a current analysis of the status of boxing in both criminal legal theory and practice.

In this book, Anderson exposes boxing’s 'exemption' from contemporary legal and social norms. Reviewing all aspects of boxing - historical, legal, moral, ethical, philosophical, medical, racial and regulatory - he concludes that the supposition that boxing has a (consensual) immunity from the ordinary law of violence, based primarily on its social utility as a recognised sport, is not as robust as is usually assumed.

An excellent book, it is a must read for all those studying sports law, popular culture and the law and jurisprudence.

"[The Legality of Boxing] reads briskly and is a terrific narrative of the sport's evolution… a measured account of facts and history." - Don Steinberg, Boxing Writers Association of America

"Anderson's book is always intriguing, and accurate, on sport and its general history… Anderson is very well read on boxing law and the book is entertaining and accessible for students of all levels interested in sport, law, and society whatever their preferred pastime or fandom." - Journal of Law and Society 34:4 (December 2007)

Introduction: The Opening Bell – Boxing in its Historical and Social Context 1. The Legal Response to Prizefighting, 1820-1920 2. Developments in Boxing Since 1920 3. Boxing and the Law: A Current Analysis 4. The Physical and Psychological Dangers of Boxing 5. Philosophical and Ethical Considerations 6. Conclusion: The Final Round – Boxing on the Canvas?

Jack Anderson lectures in the School of Law at Queen's University, Belfast.

Birkbeck Law School has been recognised as an international centre of research excellence, specialising in legal theory and theoretically informed socio-legal research and pioneering critical approaches to scholarship.

Birkbeck Law Press aims to develop a distinct publishing profile by addressing the legal challenges of late modernity. Globalisation and the move towards universal legal values, which should respect cultural specificities and local conditions, has created the urgent need for greater dialogue and understanding between the major schools of thought and legal systems in the world. Most legal publishing, driven by the needs of specialisation and the state-based nature of positive law, has not systematically addressed these concerns.