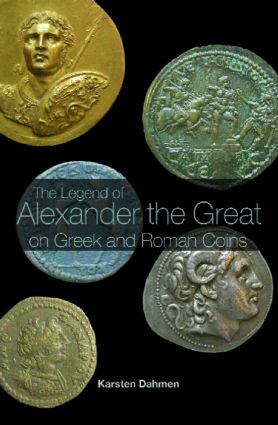 The Legend of Alexander the Great on Greek and Roman Coins

This outstanding introductory survey collects, presents and examines, for the very first time, the portraits and representations of Alexander the Great on the ancient coins of the Greek and Roman period.

From 320 BC to AD 400, Karsten Dahmen examines not only Alexander’s own coinage and the posthumous coinages of his successors, but also the re-use of his image by rulers from the Greek world and the Roman empire, to late antiquity.

Also including numismatic material that exceeds all previous published works, and well-illustrated, this historical survey brings Alexander and his legacy to life.

'a very welcome distillation in terms of both approach and information… it cannot be doubted that Dahmen's volume fills a useful gap in the literature of Alexander… Dahmen has undertaken a valuable study of Alexander's portraiture on coins spanning some 700 years.' - Bryn Mawr Classical Review

'One of the chapters in Dahmen's strongly academic yet non-fusty book, is "Making Good Use of a Legend", and his whole book shows comprehensively that this is what happened to Alexander on coins, repeatedly through the centuries. - The Times of Acadiana

'If you want to learn more about how Alexander the Great was depicted on coins, this is a wonderful book… some parts of the book rise above the merely excellent to the superb… the best textural description of these coins I've seen in English… a valuable addition to ancient numismatic scholarship.' - The Celador