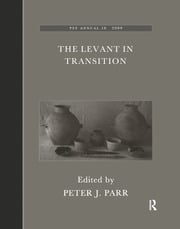 The latter part of the 3rd millennium BC witnessed severe dislocations in the social, economic and political structures of the lands at the eastern end of the Mediterranean Sea - the Levant. In the south, in what is now Israel, the Palestinian Territories and Jordan, hitherto thriving urban centres disappeared, to be replaced for several centuries by smaller agricultural and pastoral settlements, with an apparently increasingly large semi-nomadic or nomadic element in the population.

In the north - modern Syria - life in many of the earlier towns was also disrupted, but there does not seem to have been such a major break in urban traditions, and the new towns which soon replaced the old were to rise to unprecedented heights of prosperity and cultural achievement well before the end of the millennium.

Early Bronze III and IV: Chronological and Cultural Relations.  Socio-Economic Aspects of an Intermediate Bronze Age Village in the Jerzeel Valley.  The Northern Levant at the End of the Early Bronze Age: The Evidence from Sidon.  A Short-Lived Settlement System and a Lengthy Period: The Intermediate Bronze Age ('EB IV') on the Coastal Plain of Israel.  Copper Trade and Pastoralism in the Negev and Sinai Deserts in the EB IV.  The Intermediate Bronze Age (IBA) in the Negev, Forty Years Later.  Jebel Bishri in Syria and the Role of Nomadism in the End of the Early Bronze Age.  Tell Mishrifeh and its Region During the EBA IV and the EBA-MBA Transition. A First Assessment.  EB IVB-MBI in Northern Syria: Crisis and Change of a Mature Urban Civilisation.  The Late Third Millennium in the Levant: A Reappraisal of the North-South Divide.  Khirbet Iskander, Jordan and Early Bronze IV Studies: A View from a Tell.  The Southern Ghors and the Kerak Plateau in EB IV.  Aliens in the Lavent.