The Life and Work of Adelaide Procter
Poetry, Feminism and Fathers 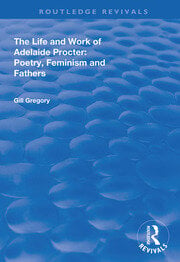 The Life and Work of Adelaide Procter: Poetry, Feminism and Fathers

First published in 1998, this volume follows the life and work of Adelaide Procter (1825-1864), one of the most important 19th-century women poets to be reassessed by literary critics in recent years. She was a significant figure in the Victorian literary landscape.

A poet (who outsold most writers bar Tennyson), a philanthropist and Roman Catholic convert, Procter committed herself to the cause of single, fallen and homeless women. She was a key member of the Langham Place Circle of campaigning women and worked tirelessly for the society for Promoting the Employment of Women.

Many of her poems are concerned with anonymous and displaced women who struggle to secure an identity and place in the world. She also writes boldly and unconventionally of women’s sexual desires.

Loved and admired by her father the poet Bryan Procter, her editor Charles Dickens and her friend W.M. Thackeray, Procter wrote from the heart of London literary circles. From this position she mounted a subtle and creative critique of the ideas and often gendered positions adopted by male predecessors and contemporaries such as John Keble, Robert Browning and Dickens himself.

Gill Gregory’s The Life and Work of Adelaide Procter: Poetry, Feminism and Fathers considers the career of this compelling and remarkable woman and discusses the extent to which she struggled to find her own voice in response to the works of some seminal literary ‘fathers’.