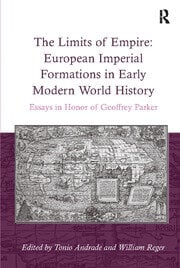 This volume, published in honor of historian Geoffrey Parker, explores the working of European empires in a global perspective, focusing on one of the most important themes of Parker’s work: the limits of empire, which is to say, the centrifugal forces - sacral, dynastic, military, diplomatic, geographical, informational - that plagued imperial formations in the early modern period (1500-1800). During this time of wrenching technological, demographic, climatic, and economic change, empires had to struggle with new religious movements, incipient nationalisms, new sea routes, new military technologies, and an evolving state system with complex new rules of diplomacy. Engaging with a host of current debates, the chapters in this book break away from conventional historical conceptions of empire as an essentially western phenomenon with clear demarcation lines between the colonizer and the colonized. These are replaced here by much more fluid and subtle conceptions that highlight complex interplays between coalitions of rulers and ruled. In so doing, the volume builds upon recent work that increasingly suggests that empires simply could not exist without the consent of their imperial subjects, or at least significant groups of them. This was as true for the British Raj as it was for imperial China or Russia. Whilst the thirteen chapters in this book focus on a number of geographic regions and adopt different approaches, each shares a focus on, and interest in, the working of empires and the ways that imperial formations dealt with - or failed to deal with - the challenges that beset them. Taken together, they reflect a new phase in the evolving historiography of empire. They also reflect the scholarly contributions of the dedicatee, Geoffrey Parker, whose life and work are discussed in the introductory chapters and, we’re proud to say, in a delightful chapter by Parker himself, an autobiographical reflection that closes the book.

Contents: Geoffrey Parker and early modern history, Tonio Andrade and William Reger; The limits of empire: an introduction, Tonio Andrade and William Reger; 'Por Dios, por patria': the sacral limits of empire as seen in Catalan political sermons, 1630-1641, Andrew Mitchell; Enlightened absolutism and new frontiers for political authority: building towards a state religion in 18th-century Spain, Andrea J. Smidt; The limits of faith in a maritime empire: Mennonites, trade and politics in the Dutch Golden Age, Mary S. Sprunger; Information, gossip and rumor: the limits of intelligence at the early modern court, 1558-1585, Denice Fett; Philip II, information overload, and the early modern moment, Paul M. Dover; Italy and the limits of the Spanish empire, Michael J. Levin; The limits of dynastic power: Poland-Lithuania, Sweden and the problem of composite monarchy in the age of the Vasas, 1562-1668, Robert I. Frost; The artillery fortress was an engine of European expansion: evidence from East Asia, Tonio Andrade; The limits of empire: the case of Britain, Jeremy Black; The faÃ§ade of order: claiming imperial space in early modern Russia, Matthew P. Romaniello; Renaissance diplomacy and the limits of empire: Eustace Chapuys, Habsburg imperialisms, and dissimulation as method, Richard Lundell; Distance and misinformation in the conquest of America, Bethany Aram; Brawling behaviors in the Dutch colonial empire: changing norms of fairness?, Pamela McVay; Isabel Clara Eugenia: daughter of the Spanish empire, Cristina Borreguero BeltrÃ¡n; Messianic imperialism or traditional dynasticism? The grand strategy of Philip II and the Spanish failure in the wars of the 1590s, Edward Shannon Tenace; 'A man's gotta know his limitations': reflections on a misspent past, Geoffrey Parker; Index.