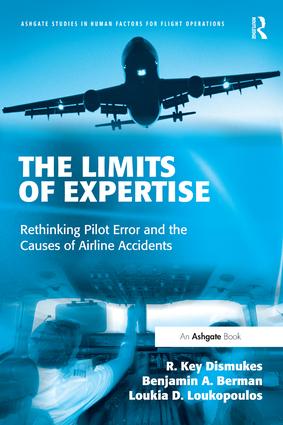 The Limits of Expertise

Why would highly skilled, well-trained pilots make errors that lead to accidents when they had safely completed many thousands of previous flights? The majority of all aviation accidents are attributed primarily to human error, but this is often misinterpreted as evidence of lack of skill, vigilance, or conscientiousness of the pilots. The Limits of Expertise is a fresh look at the causes of pilot error and aviation accidents, arguing that accidents can be understood only in the context of how the overall aviation system operates. The authors analyzed in great depth the 19 major U.S. airline accidents from 1991-2000 in which the National Transportation Safety Board (NTSB) found crew error to be a causal factor. Each accident is reviewed in a separate chapter that examines events and crew actions and explores the cognitive processes in play at each step. The approach is guided by extensive evidence from cognitive psychology that human skill and error are opposite sides of the same coin. The book examines the ways in which competing task demands, ambiguity and organizational pressures interact with cognitive processes to make all experts vulnerable to characteristic forms of error. The final chapter identifies themes cutting across the accidents, discusses the role of chance, criticizes simplistic concepts of causality of accidents, and suggests ways to reduce vulnerability to these catastrophes. The authors' complementary experience allowed a unique approach to the study: accident investigation with the NTSB, cognitive psychology research both in the lab and in the field, enormous first-hand experience of piloting, and application of aviation psychology in both civil and military operations. This combination allowed the authors to examine and explain the domain-specific aspects of aviation operations and to extend advances in basic research in cognition to complex issues of human performance in the real world. Although The Limits of Expertise is directed to aviation operations, the implications are clear for understanding the decision processes, skilled performance and errors of professionals in many domains, including medicine.

'The authors do not, however, argue that human error is just part of the price of doing business - it must still be reduced, and to be reduced, the factors associated with it must be understood as well as possible, which is the aim of their study.' AeroSafety World, May 2007 'Overall, this is an excellent and innovative text which reflects the authors' original approach to airline safety. The book is outstanding in its identification of common themes that run deeper than in previous analyses of aviation safety, and the final chapter contains clear, pragmatic guidance to the air transport and to researchers. In the final sections of the book, the authors sum up the central challenge faced by the industry in reducing vulnerability to error: pilots should be given more information, better interfaces and clearer decision-making guidance - backed up by prioritizing adherence to that guidance over commercial pressures such as on-time performance. The book will be informative for diverse readers in the air transport industry, including operational staff, researchers, safety analysts, accident investigators, designers of systems and procedures, training providers and students.' Ben Daley, Manchester Metropolitan University - Review Submitted to Amazon.com 'The Limits of Expertise challenges how we think about accidents and pilot error. From details of recent accidents, the authors argue that while pilot error is often concluded as cause, we should expect many operators similarly situated to make comparable decisions and take equivalent actions. From that perspective, individual actions and errors are not the source of accidents but a result of systemic causes. This reframing provides good news - managers and regulators can act at system levels to prevent many future accidents.' Tom Chidester, Civil Aerospace Medical Institute, USA 'This is not a Michael Crichton thriller, but those familiar with aviation will easily be able to follow the details as they are stated in fa

Dr Dismukes is Chief Scientist for Human Factors in the Human Factors Research & Technology Division at NASA Ames Research Center. His current research addresses cognitive issues involved in the skilled performance of pilots, their ability to manage challenging situations, and their vulnerability to error; prospective memory; and management of attention in concurrent task performance. Captain Berman is a senior research associate at San Jose State University/NASA Ames Research Center and flies the Boeing 737 for a major air carrier. He is the former Chief of Major Investigations of the U.S. National Transportation Board, where he previously led the Operational Factors Division, served as a member of the major accident go-team responsible for flight operations, and managed safety studies. Dr Loukopoulos is a Senior Research Associate at NASA's Human Factors Research and Technology Division. She currently resides in Athens, Greece where she serves as a human factors consultant to the Greek Air Accident Investigation and Safety Board and where she served on the Helios Airways 2005 accident investigation. She also continues her collaboration with NASA through the San Jose State University Foundation.

Ashgate Studies in Human Factors for Flight Operations is a series dedicated to publishing high-quality monographs and edited volumes which contribute to the objective of improving the safe and efficient operation of aircraft. The series will achieve this by disseminating new theoretical and empirical research from specialists in all relevant fields of aviation human factors. Its foundation will be in applied psychology, presenting new developments and applications in such established fields as CRM, SA and decision-making. It will also encompass many other crucial areas such as fatigue and stress, the social environment, SMS, design, technology, communication and training. Submitted work relevant to the objective of the series will be considered for publication by the board of editors. The series is intended for an international readership and so books with a broad geographical appeal are especially encouraged.