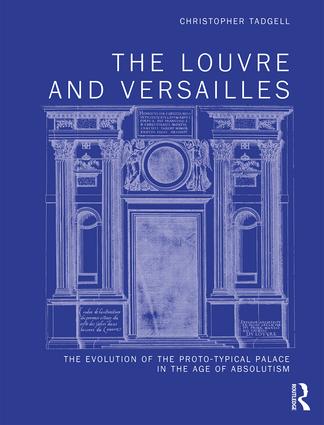 The Louvre and Versailles

The Evolution of the Proto-typical Palace in the Age of Absolutism, 1st Edition

This book traces the evolution of the great palaces of the Louvre and Versailles, from the medieval background to Pierre Lescot’s designs for expanding the former in the mid-16th century and to the successive grands projets for the transformation of the latter over the course of the 18th century. Detailed architectural analysis is set in the context of the development of the medieval monarchy towards absolutism, the significance of Hispano-Burgundian court etiquette as a influence on planning, and the effect of the French monarchy’s financial incontinence on royal building ambitions.

On the basis of exhaustive original research, recalling contemporary testimony and re-examining the works themselves, the book offers an alternative to the current ordering of François Mansart’s celebrated projects for the completion of the Louvre and reassesses the subsequent contribution of Claude Perrault. After a thorough examination of the development of Versailles, exterior and interior, it traces the influence of Bernini’s third Louvre project on Ange-Jacques Gabriel’s designs for the rebuilding of the town front.

Finally, the book looks at the influence of the great French palaces on those seeking to emulate their ambition, from Stockholm in the late 17th century to the deliriously opulent late 19th-century palace of Ludwig II of Bavaria at Herrenchiemsee.

The book includes a wealth of illustrative material and supporting documents, bringing this comprehensive and authoritative text to life.

The Louvre: from round tower to square court over half a millennium 1. Inception 21 1.1. Apogee of the Valois 1.2. To the palace with Lescot 1.3. Valois valediction 2. Expansion 2.1. Introduction: Advent of the Bourbons 2.2. Back to the palace with Lemercier: expansion eclipsed 2.3. L ouis XIV and Mazarin 2.4. Back to the palace with Le Vau: expansion regained 3. Resolution 3.1. Self-assertive king and minister 3.2. Colbert and the palace 3.3. Amplification 3.4. Prototype achieved Versailles: transformations of a hunting lodge across two reigns 1. Inception and development for Louis XIV 1.1. The pursuit of gloire 1.2. The palace of Le Vau and Le Brun: envelopment 1.3. Pursuit of gloire renewed 1.4. The palace of Le Brun and Hardouin-Mansart: expansion 1.5. Marly 1.6. After Colbert: gloire sullied 1.7. Retreat from magniloquence 1.8. Twilight of gloire 1.9. The final phase of the old king’s palace building 2. reformation and refinement for Louis xv 2.1. From profligate regency to personal rule 2.2. Sophisticated planning and exotic decoration 2.3. Reviewed theory and reformed practice 2.4. Projects for the palace 2.5. Return to the Louvre 2.6. Towards the definitive grand projet 2.7. Diversion to Trianon again 2.8. Back to the palace 2.9. Resolution of the grand projet Epilogue les siecles de Louis XIV Index

Generally acknowledged as an expert on French classical architecture, Christopher Tadgell has been publishing in the field for well over four decades. He studied art history at the Courtauld Institute in London and in 1974 was awarded his PhD for a thesis on the Neoclassical architectural theorist, Ange-Jacques Gabriel. He subsequently taught in London and at the Kent Institute of Art and Design in Canterbury, with interludes as F.L. Morgan Professor of Architectural Design at the University of Louisville and as a Member of the Institute for Advanced Study, Princeton.