The Magic Will
Stories and Essays 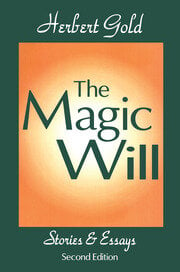 The Magic Will: Stories and Essays

"In the course of an impressive career as a writer, Herbert Gold has demonstrated many gifts, among them his talent for mak-ing high drama of ordinary events, ordinary people." -Chicago Tribune Book World

"Not just a good book, but a great one."-Daily Mail (London)

"One of the most gifted writers in America."-Detroit Times

Important writers are expected to gather together collections of their shorter works-the obligatory book of stories or essays. In this collection, Herbert Gold discards convention, and instead combines fiction and non-fiction themes that have been important to him as a writer and social thinker. This "interchange between fact and fiction," as Gold writes, "presents the picture of an American mind wrestling with the American mentality." And that mind ranges wide: from the miseries of Haiti to the disasters of Biafra; from the new universities and the beatniks and hippies of San Francisco in the 1960s to the literary life and encounters with random violence, love, death, and sexuality in the present.

Portions of this book have been published in periodicals as varied as Esquire and Look, Hudson Review, and Tri-Quarterly, and some appear here for the first time. For this edition, Gold bridges the sections with new introductions, which link the specific works, the times, and his life. The book includes the savage and moving story "A Death on the East Side," and his meditation on the doom of Biafra and the meaning of its fate. He has added two new essays, "King of the Cleveland Beatniks," about his brother, and "Quality Time with Sonny Barger," about the former president of the Hell's Angels Oakland Chapter. These show his consistent interest in what many would see as the margins of social life.

Of the title, the author writes: "The Magic Will" seeks to make the real world unreal and magical, and the unreal and magical world practical and real." Amusing, touching, playful, ultimately deeply serious, this book by Herbert Gold further illuminates the mind and heart of a superb writer. It will be a joy to those interested in the humanities, as well as cultural history and social awareness in the broadest sense.

Herbert Gold is a novelist, short story writer, essayist, and occasional journalist, who has made his living as a writer for fifty years.