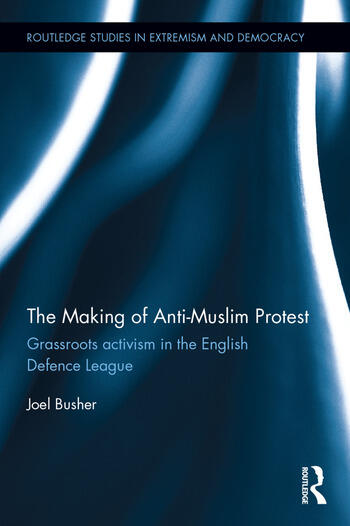 The Making of Anti-Muslim Protest: Grassroots Activism in the English Defence League

Activism in any social movement group is, as Deborah Gould observes, a project of collective ‘world-making’. It is about changing the world out there by influencing policy and public opinion, but is also about the way it transforms the lives of participants – activists generate new identities, cultures, social ties, rich and varied emotional experiences and interpretations of the world around them. Movements are more likely to be able to attract and sustain support when as projects of collective world-making they feel compelling to activists and would-be activists.

In this book Busher explores what has made activism in the English Defence League (EDL), an anti-Muslim protest movement that has staged demonstrations across the UK since 2009, so compelling to those who have chosen to march under its banner. Based on sixteen months of overt observation with grassroots activists, he explores how people became involved with the group; how they forged and intensified belief in the EDL cause; how they negotiated accusations that they were just another racist, far right group; and how grassroots EDL activism began to unravel during the course of 2011 but did not do so altogether. Providing a fresh insight as to how contemporary anti-minority protest movements work on the inside, this book will be of interest to students, scholars and activists working in the areas of British politics, extremism, social movements, community relations and current affairs more generally.

1. Introduction 2. Journeys into EDL activism 3. Developing belief in the cause 4. Trying to be not-racist and not-far-right 5. The unravelling of EDL activism 6. The persistence of organised anti-Muslim activism 7. Conclusions

Joel Busher is a Research Fellow at the Centre for Trust, Peace and Social Relations, Coventry University, UK. His primary research interest is in the micro-social processes through which people achieve, or are frustrated in their attempts to achieve, sustained mobilisations, and how understanding these processes can inform policy and practice.

A deeply penetrating study of a movement that shatters conventional ideas of left/right and racist/antiracist.   Busher's skilled and sensitive ethnography provides new insight into how the EDL created a shared world of anti-Muslim activism, and how this world unraveled in a cycle of resentments, infighting, and skepticism.

Approachably written and closely observed, this book gets inside the life world of EDL activists – a bunch of people more complicated and varied than commonly imagined.  Anyone wishing to understand the complexity and the contradictions at the heart of the English Defence League should read Joel Busher’s fascinating book.

Political causes emerge, change, cross-breed, and subside in complex ways. The English Defence League is a fascinating case, which emerged from networks of football hooligans, became a lightning rod for anti-Muslim sentiment, and yet resisted the racist slogans of the far Right. This fine book takes us inside the heads -- and hearts -- of the League's participants.

Stepping in the shoes of English Defence League activists, Joel Busher paints an insightful inside-picture of the British anti-Islam movement. Years of carefully documented fieldwork yield a thick and rich description of a movement that rocked Great Britain for some time.

"The English Defence League has been labelled fascist, racist, and extremist; its foot-soldiers have been disparaged as mindless thugs. Joel Busher is no EDL-sympathizer, and yet confronts such glib generalizations in this lucid and penetrating book. Busher really gets up close to reveal the essential heterogeneity of those who took to the streets and marched under the EDL banner. This is a superlative study. Everyone with an interest in anti-Muslim activism should read it."

Busher’s The Making of Anti-Muslim Protest: Grassroots Activism in the English Defence League is a masterful piece of story-telling, sewn together with solid theoretical insights into the individual and ecological dynamics that help to explain the rise, fall, and continuity of the EDL. This "boots on the ground" approach allows us to hear clearly how members at once distanced themselves from "racist" identities while nonetheless avowing "racist" sentiments.

"As an analysis of a cross section of the group’s supporters, this book is full of important insights." -- Dr Paul Jackson, Searchlight Magazine, Spring/Summer 2016