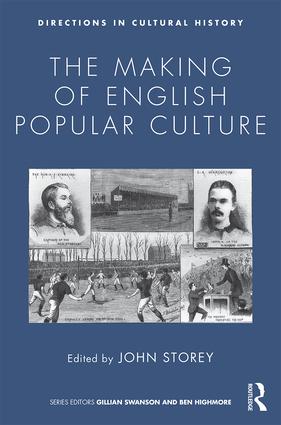 The Making of English Popular Culture

The Making of English Popular Culture provides an account of the making of popular culture in the nineteenth century.

While a form of what we might describe as popular culture existed before this period, John Storey has assembled a collection that demonstrates how what we now think of as popular culture first emerged as a result of the enormous changes that accompanied the industrial revolution. Particularly significant are the technological changes that made the production of new forms of culture possible and the concentration of people in urban areas that created significant audiences for this new culture.

Consisting of fourteen original chapters that cover diverse topics ranging from seaside holidays and the invention of Christmas tradition, to advertising, music and popular fiction, the collection aims to enhance our understanding of the relationship between culture and power, as explored through areas such as ‘race’, ethnicity, class, sexuality and gender. It also aims to encourage within cultural studies a renewed historical sense when engaging critically with popular culture by exploring the historical conditions surrounding the existence of popular texts and practices.

Written in a highly accessible style The Making of English Popular Culture is an ideal text for undergraduates studying cultural and media studies, literary studies, cultural history and visual culture.

"The Making of English Popular Culture explores the complex dynamics that characterised the emergence of popular culture in the 19th century. With 14 articles on a vast range of popular cultural practices and an introduction that provides an up-to-date theoretical framework, Storey once again succeeds in presenting a fascinating book for academics, students and the general public alike."

"From music hall to seaside holidays, from boys’ comics to the phonograph: this book offers a series of fascinating and wide-ranging essays on the pre-history of our popular culture. In the best tradition of cultural studies, it is historically grounded and richly detailed but also full of contemporary political and cultural resonances." Joe Moran, Professor of English and Cultural History, Liverpool John Moores University

"It would be hard to do justice to a book of this breadth and depth in just a few words but it represents and excellent and wide-ranging collection of essays which result in a volume of great coherence. It is essential reading for anyone interested in the historical origins of an impressive range of popular cultural forms in Britain stemming from the changes brought about by the Industrial Revolution. It also responds in an admirable way to Stuart Hall’s imperative to ‘always historicize’."

2 ‘But it’s more than a game. It’s an institution’: Cricket, Class and Victorian Britain’s Imperial Englishness

5 Inventing the Victorian Boy: S.O. Beeton’s in The Boy’s Own Magazine

6 Accept no substitutions! Advertising, Gender and ‘Race’ in Constructions of the Consumer in the Nineteenth Century

8 Shocking Readers: The Genres of Victorian Popular Fiction, the Classes, and the Book Market

10 ‘For the benefit of old boys, young boys, odd boys generally, and even girls’: The irresistible rise of the British comic, 1884-1900

13 Class and the invention of Tradition: the cases of Christmas, Football, and Folksong

14 Capturing (not Catching) the Ripper: Constructing the Myth of Jack the Ripper in Nineteenth Century London

John Storey is Emeritus Professor of Cultural Studies at the Centre for Research in Media and Cultural Studies, University of Sunderland, UK. He has published extensively in the field of cultural studies, including ten books, the most recent being the seventh edition of Cultural Theory and Popular Culture: An Introduction (2015). His work has been translated into Arabic, Chinese, Dutch, German, Greek, Indonesian, Japanese, Korean, Persian, Polish, Portuguese (Brazil and Portugal), Russian, Serbian, Slovenian, Spanish, Swedish, Turkish and Ukrainian. He is also on editorial/advisory boards in Australia, Canada, China, Germany, Lithuania, the Netherlands, Spain, the UK and the USA, and has been a Visiting Professor at the Technical University of Dresden, the University of Henan, the University of Vienna and the University of Wuhan.