The Maryland Campaign of September 1862
Ezra A. Carman’s Definitive Study of the Union and Confederate Armies at Antietam 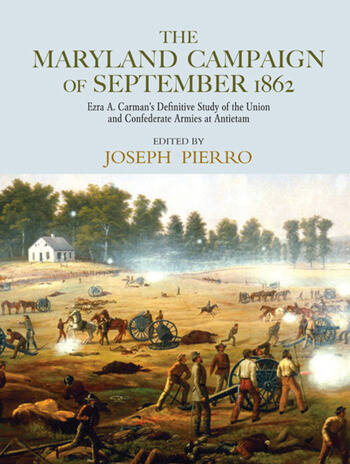 The Maryland Campaign of September 1862: Ezra A. Carman’s Definitive Study of the Union and Confederate Armies at Antietam

Completed in the early 1900s, The Maryland Campaign of September 1862 is still the essential source for anyone seeking understanding of the bloodiest day in all of American history. As the U.S. War Department’s official expert on the Battle of Antietam, Ezra Carman corresponded with and interviewed hundreds of other veterans from both sides of the conflict to produce a comprehensive history of the campaign that dashed the Confederacy’s best hope for independence and ushered in the Emancipation Proclamation.

Nearly a century after its completion, Carman's manuscript has finally made its way into print, in an attractively packaged one-volume edition painstakingly edited, annotated, and indexed by Joseph Pierro. This edition, the first to publish the entire Carman manuscript, including the fifteen appendices, is designed for ease of use, with standardized punctuation and spelling, and conveniently footnoted explanations wherever necessary. The Maryland Campaign of September 1862 is a crucial document for anyone interested in delving below the surface of the military campaign that forever altered the course of American history, and is still the only complete edition of Carman's work on the market.

The Ezra Carman manuscript is the definitive study of that bloody September day in 1862. By editing it Joseph Pierro has done a tremendous service to the field of Civil War studies. Indeed, this work is one of the most important Civil War publications to come out in decades.

Many accounts of Civil War battles were written in the decades after the war by soldiers who had participated in them. None rivals in accuracy and thoroughness Ezra Carman's study of the battles of South Mountain and Antietam, in which he fought as colonel of the 13th New Jersey. Students of the 1862 Maryland campaign have long relied on this manuscript as a vital source; Joseph Pierro's scrupulous editorial work has now made this detailed narrative accessible to everyone. A splendid achievement.

At last, after a century, Ezra A. Carman's The Maryland Campaign of September 1862 has received the attention it deserves.  A Union veteran, Carman authored a remarkable primary study of the critical operations that ended along Antietam Creek.  Editor Joseph Pierro has given students of the Civil War and American history a most welcome and long overdue book.

— Jeffry D. Wert, author of The Sword Of Lincoln: The Army of the Potomac

My introduction to the Ezra A. Carman Papers at the Library of Congress and National Archives came in the spring of 1961. I was astounded and amazed by their depth and scope. The correspondence, troop movement maps, etc, along with Carman’s unpublished manuscript on the Antietam Campaign constitutes then as now an invaluable legacy to the American people by Carman and the veterans of Antietam. But for too long that resource has only been available to the general public as microfilm or by traveling to Washington. Now thanks to the publishers, and skilled, knowledgeable, sympathetic, but light-handed editor Joseph Pierro, an annotated copy of Carman’s masterpiece The Maryland Campaign of September 1862 will be available to the public.

Joseph Pierro brings into the open one of the great and largely unknown masterworks of Civil War history. Ezra Carman's work on Antietam is a fountainhead for study of that pivotal battle, written by a man who was in the fight and who spent most of his life studying and marking the battlefield. No student can afford to ignore this stunningly thorough and brilliantly edited classic.

— William C. Davis, author of Look Away! A History of the Confederate States of America

Long-awaited good news for students of the Battle of Antietam...Mr. Pierro has taken the essential first step by moving Carman's unique and comprehensive manuscript out of the realm of the hard-to-find and -understand. Historians, students, and history buffs now can use invaluable Carman material as easily as other sources in studying what some call the most important battle of the Civil War.

"The Maryland Campaign of September 1862 should be a part of every institutional Civil War library, as well as the bookshelf of serious students of the campaign"