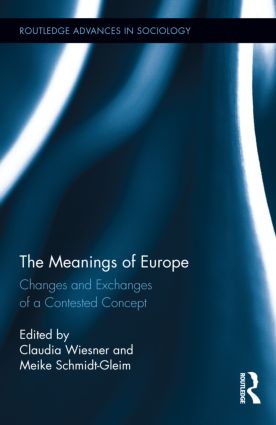 The Meanings of Europe

Changes and Exchanges of a Contested Concept, 1st Edition

What is Europe? What are the contents of the concept of Europe? And what defines European identity? Instead of only asking these classical questions, this volume also explores who asks these questions, and who is addressed with such questions. Who answers the questions, from which standpoints and for what reasons? Which philosophical, historical, religious or political traditions influence the answers? This book addresses its task in three parts. The first concentrates on the controversies around the meaning of Europe. The second focuses on the role of the European Union. The third discusses Europe and its relations to different types of otherness, or rather, non-European-ness. The volume produces a complex and plural picture of the concepts, ideas, debates and (ex)changes associated with the concept of Europe, and has a clear significance for today’s debates on European identity, Europeanization, and the EU.

The Meanings of Europe: Introduction Meike Schmidt-Gleim and Claudia Wiesner Part I: Meanings of Europe 1. The Plural Meanings of Europe: A Historical Task Nere Basabe 2. Europe and the Spectre of the Barbarian Meike Schmidt-Gleim 3. In the Grip of Marranism: The Other Within Europe´s Multiple Modernities Paola Ferruta 4. "In Europe There Are Positions to Defend": The 1930s and Walter Benjamin’s Jewish Ark Marc Berdet 5. Parliamentarism as a European Type of Polity: Constructing the Presidentialism Versus Parliamentarism Divide in Walter Bagehot’s English Constitution Kari Palonen Part II: Europe and the EU 6. From Safeguarding Peace in Europe to Financial Crisis: Old Questions and New Challenges of European Integration Claudia Wiesner 7. The Symbolical Revocation of Symbolism: The Lisbon Treaty Hans Lietzmann 8. The Paradoxes of a European Citizenship Helmut Dubiel 9. Constructing Europe as an Area via EU Documents on Citizenship and Culture Katja Mäkinen 10. Assigning Meaning to (EU-)Europe Through Cultural Policy: European Capitals of Culture Emilia Palonen 11. Euro-Zone Crisis and Parliamentary Democracy: Lessons from the Greek Case Anthoula Malkopoulou Part III: Europeanness and Non-Europeanness 12. Scenes of Voting: Reactions to the Swiss Referendum on the Ban on the Construction of Minarets (2009) in Switzerland and Germany Andreas Langenohl 13. Translating Citizenship: On Some Pitfalls and the Politics of Meaning in the Definition of "Europeanness" Stefan Nowotny 14. "Wherever You Go, You Will Be the Polis": Europe Without Borders Tuija Parvikko 15. Shaping New Russian Identity: Discourses of "Inclusion/Exclusion in Europe" Galina Zvereva 16. Europe’s Ends Kalypso Nicolaidis

Meike Schmidt-Gleim is Director of the research project “Atlas of Arcadia” at the Academy of Fine Arts, Vienna, Austria.