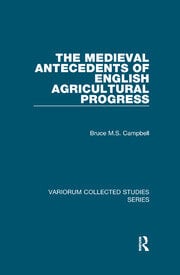 Until recently, historians tended to stress the perceived technological and ecological shortcomings of medieval agriculture. The ten essays assembled in this volume offer a contrary view. Based upon close documentary analysis of the demesne farms managed for and by lords, they show that, by 1300, in the most commercialized parts of England, production decisions were based upon relative factor costs and commodity prices. Moreover, when and where economic conditions were ripe and environmental and institutional circumstances favourable, medieval cultivators successfully secured high and ecologically sustainable levels of land productivity. They achieved this by integrating crop and livestock production into the sort of manure-intensive systems of mixed-husbandry which later underpinned the more celebrated output growth of the seventeenth and eighteenth centuries. If medieval agriculture failed to fulfill the production potential provided by wider adoption of such systems, this is more appropriately explained by the want of the kind of market incentives that might have justified investment, innovation, and specialization on the scale that characterized the so-called 'agricultural revolution', than either the lack of appropriate agricultural technology or the innate 'backwardness' of medieval cultivators.

Bruce M.S. Campbell is Professor of Medieval Economic History at the School of Geography, Archaeology and Palaeoecology, The Queen's University of Belfast, UK.

’Although some of Campbell’s findings have been amended or amplified by subsequent research, none of the papers in this remarkably coherent collection appears outdated, and despite some inevitable overlap can usefully be read together by historians interested in longterm agricultural progress and technological change.’ English Historical Review ’...this is a well-produced collection of essays in which all medieval agricultural historians will find much of interest.’ Economic History Review