The Medieval Way of War
Studies in Medieval Military History in Honor of Bernard S. Bachrach 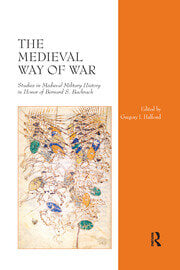 The Medieval Way of War: Studies in Medieval Military History in Honor of Bernard S. Bachrach

Few historians have argued so forcefully or persuasively as Bernard S. Bachrach for the study of warfare as not only worthy of scholarly attention, but demanding of it. In his many publications Bachrach has established unequivocally the relevance of military institutions and activity for an understanding of medieval European societies, polities, and mentalities. In so doing, as much as any scholar of his generation, he has helped to define the status quaestionis for the field of medieval military history. The Medieval Way of War: Studies in Medieval Military History in Honor of Bernard S. Bachrach pays tribute to its honoree by gathering in a single volume seventeen original studies from an international roster of leading experts in the military history of medieval Europe. Ranging chronologically from Late Antiquity through the Later Middle Ages (ca. AD 300-1500), and with a broad geographical scope stretching from the British Isles to the Middle East, these diverse studies address an array of critical themes and debates relevant to the conduct of war in medieval Europe. These themes include the formation and implementation of military grand strategies; the fiscal, material, and administrative resources that underpinned the conduct of war in medieval Europe; and religious, legal, and artistic responses to military violence. Collectively, these seventeen studies embrace the interdisciplinarity and topical diversity intrinsic to Bachrach’s research. Additionally, they strongly echo his conviction that the study of armed conflict is indispensable for an accurate and comprehensive understanding of medieval European history.

Bibliography of publications by Bernard S. Bachrach.  Part 1: The History and Historiography of War in Late Antique and Early Medieval Europe:  The Roman frontier along the Upper Danube in Late Antiquity.  War and peace in the Acta of the Merovingian church councils.  Reflections on Alfred the Great as a military leader.  Conrad II (990-1039), the first medieval emperor of three kingdoms.  Maps of French history before the atlas of Auguste Longnon.  Part 2 Warfare in the East in the Crusading Era:  A medieval siege of Troy: the fight to the death at Acre, 1189-1191 or the tears of a' alAua,[yen] al-DA"n.  King Richard's plan for the Battle of ArsA"f/Arsur, 1191.  Crusading warfare, chivalry and the enslavement of women and children.  The Catalan company in the East: evolution of a wandering army (1303-1311).  Part 3 European Warfare in the Central and Later Middle Ages:   A decisive century in the struggle against Islam in Iberia, ca. 1031-1157: grand strategic perspectives.  Contrary winds: theories of history and the limits of Sachkritik.  Women in the context of romanesque combat scenes in Spain and France: virtue, judgment and rape.  The Battle of Bouvines 27 July 1214.  King Edward I's military bureaucracy: the case of Peter of Dunwich.  The trebuchets of the Tower.  The military obligations of the Danish church in the High Middle Ages.  The implications of the Anonimo Romano account of the Battle of Crecy.

'A book like this, written in honor of a specific historian whose writings have been important in military history, will be most interesting to students of Medieval Military History. ... This book is particularly worthy as a scholarly reference for the military history of the Middle Ages, giving a one-volume sample of a broad variety of subjects that deserves a place on library shelves, or on personal bookshelves of researchers who want to appreciate the legacy of excellent research that Bachrach has encouraged through his life and work.' De Re Militari