The Middle East and North Africa 2015 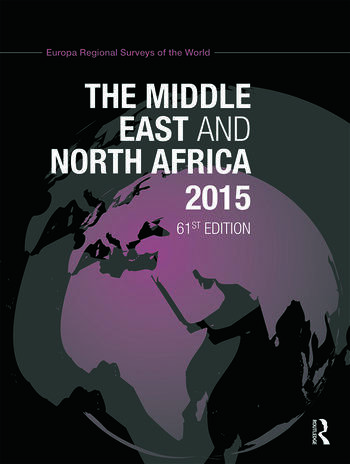 The Middle East and North Africa 2015

Now in its sixty-first edition, this title continues to provide the most up-to-date geo-political and economic information for this important world area.

- extensive coverage of the ongoing conflict between Government and opposition forces in Syria, and of the political and military crisis in Iraq

- covers the Middle East and North Africa from Algeria to Yemen

- accurately and impartially records the latest political and economic developments

- provides comprehensive data on all major organizations active in the countries of the region.

- introductory essays cover a wide range of topics relating to the region as a whole.

Individual chapters on each country incorporating:

- essays on the physical and social geography, recent history and economy

- includes all major international organizations active in the Middle East and North Africa; research institutes specializing in the region; and select bibliographies of books and periodicals.

‘If one had to choose a single book for understanding the contemporary Middle East, then surely this must be that book.’ – The Middle East

‘There is simply nothing else on the market that provides as much material on each of the countries of the Middle East and North Africa in one volume.’ – Royal United Services Institute for Defence Studies

‘We have praised successive issues of this work so regularly that is becomes difficult to think up new eulogies, deserved though they are.’ – World Affairs Report

‘It is an excellent source of reference … strongly recommended for scholars, government officials and businessmen.’ – Middle East Business Review

‘You could enquire within for pretty well anything relating to the region and get an answer.’ – Times Literary Supplement