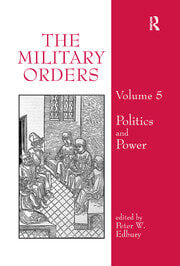 This volume contains papers from the fifth conference on the military orders held in London. It deals with the archaeological investigations at the Hospitaller castle at al-Marqab and examines aspects of the history of the military orders in the Latin East and the Mediterranean lands.

Contents: Editor's preface; Introduction, Jonathan Riley-Smith; The Military-religious orders: a medieval 'school for administrators'? Karl Borchardt. Part 1 The Latin East: Archaeological and fresco research in the castle chapel at al-Marqab: a preliminary report on the results of the first seasons, Balázs Major and Éva Galambos; The two Hospitaller chapter houses at al-Marqab: a study in architectural reconstruction, Gergely Buzás; Meat consumption and animal keeping in the citadel at al-Marqab: a preliminary report, István Kováts; The Order of St Thomas of Canterbury in Acre, Denys Pringle; Templars, Franks, Syrians and the Double Pact of 1244, Ilya Berkovich; Royal and papal interference in the dispatch of supplies to the East by the military orders in the later 13th century, Alan Forey; The Hospitallers and Charles I of Anjou: political and economic relations between the Kingdom of Sicily and the Holy Land, Cristian Guzzo; King James II of Cyprus and the Hospitallers: evidence from the Livre des Remembrances, Nicholas Coureas. Part 2 Hospitaller Rhodes and Malta: Smoke and fire signals at Rhodes: 1449, Anthony Luttrell; Success and failure in the practice of power by Pere Ramon Sacosta, Master of the Hospital (1461-1467), Pierre Bonneaud; Battlefield tourism: a description of the 1480 Siege of Rhodes, Theresa M. Vann; Woven tapestries: manifestations of grandeur, politics and power as well as pictorial sources for Hospitaller history: a re-identification, Robert L. Dauber; Politics and power in Grand Master Verdalle's Statuta Hospitalis Hierusalem (1588), Emanuel Buttigieg; Towards the end of the Order of the Hospital: reflections on the views of two Venetian brethren, Antonio Miari and Ottavio Benvenuti, Victor Mallia-Milanes. Part 3 The British Isles: The military orders in Wales and the Welsh March in the Middle Ages, Helen J. Nicholson; The military orders at the court of King John, Paul Webster; Walking a thin line: Hospitaller priors, politics and power in late medieval England, Simon Phillips; Procedure, political influence and preceptorial appointments in the Hospitaller priory of England: the Templecombe disputes of 1463-79, Greg O'Malley. Part 4 Italy: Sta Maria in Carbonara in Viterbo: history and architecture of a Templar preceptory in northern Lazio, Nadia Bagnarini; The Spanish military orders in Italy: initial remarks on patronage and properties (12th-14th centuries), Elena Bellomo; The Hospitallers in southern Italy: families and power, Mariarosaria Salerno; The Teutonic order of Italy: an example of the diplomatic ability of the military orders, Kristjan Toomaspoeg. Part 5 Northern and Eastern Europe: The Counts of Brienne and the military orders in the 13th century, Karol Polejowski; The geography of power: the Hospitallers in the territorial policies of the Bishops of Strasbourg in lower Alsace in the 13th century, Nicolas Buchheit; The priors of the Knights Hospitaller from the Piast dynasty in the province of Bohemia: hereditary princes or ecclesiastical dignitaries?, Maria Starnawska; Royal power and the Hungarian-Slavonian Hospitaller priors before the mid-15th century, Zsolt Hunyadi; Politics, diplomacy and the recruitment of mercenaries before the Battle of Tannenberg-Grunwald-Žalgiris in 1410, Sven Ekdahl; Power to the educated? Priest-brethren and their education using data of the Utrecht Bailiwick of the Teutonic Order (1350-1600), Rombert Stapel; Hidden in the bushes: the Teutonic Order in the Bailwick of Utrecht in the 1780-1806 revolutionary period, Renger E. de Bruin. Part 6 The Iberian Peninsula: Troubles and tensions before the trial: the last years of the Castilian Templar province, Philippe Josserand; The relationship between the Crown and the monastery of Santos during the Middle Ages, Joel Silva Ferreira Mata; The recruitment of the Portuguese military orders: a sociological profile, (1385-1521), António Pestana de Vasconcelos and Manuel Lamas de Mendonça; The Portuguese military ord