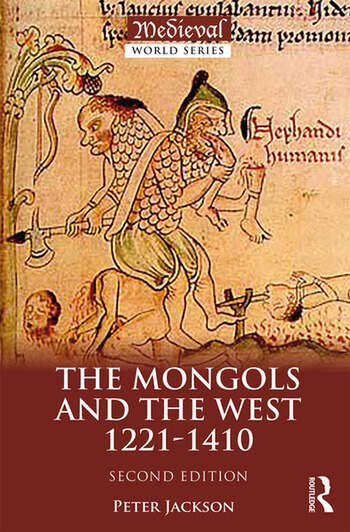 The Mongols and the West

provides a comprehensive survey of relations between the Catholic West and the Mongol Empire from the first appearance of Chinggis (Genghis) Khan’s armies on Europe’s horizons in 1221 to the battle of Tannenberg in 1410. This book has been designed to provide a synthesis of previous scholarship on relations between the Mongols and the Catholic world as well as to offer new approaches and conclusions on the subject. It considers the tension between Western hopes of the Mongols as allies against growing Muslim powers and the Mongols’ position as conquerors with their own agenda, and evaluates the impact of Mongol-Western contacts on the West’s expanding knowledge of the world.

This second edition takes into account the wealth of scholarly literature that has emerged in the years since the previous edition and contains significantly extended chapters on trade and mission. It charts the course of military confrontation and diplomatic relations between the Mongols and the West, and re-examines the commercial opportunities offered to Western merchants by Mongol rule and the failure of Catholic missionaries to convert the Mongols to Christianity.

Fully revised and containing a range of maps, genealogical tables and both European and non-European sources throughout, The Mongols and the West is ideal for students of medieval European history and the crusades.

Chapter 1: Latin Christendom and its neighbours in the early thirteenth century

Chapter 2: A world-empire in the making

Chapter 4: A remedy against the Tartars

Chapter 5: The halting of the Mongol advance

Chapter 6: Images of the enemy

Chapter 7: From confrontation to coexistence: the Golden Horde

Chapter 8: An ally against Islam? The Mongols in the Near East

Chapter 10: Western traders and adventurers in the Mongol world

Chapter 11: Mission to the infidel; Epilogue

is Emeritus Professor of Medieval History at Keele University, and a Fellow of the British Academy. His publications cover the Mongols, the Crusades and medieval Islam, and his most recent book is The Mongols and the Islamic World from Conquest to Conversion (2017).

‘The Mongols and the West is an excellent resource for Asian historians, European historians, and world historians desiring to learn about Mongol interactions with the West at large including European missions and travelers, Russian rule, and Middle Eastern campaigns.’