The Music of Dada
A lesson in intermediality for our times 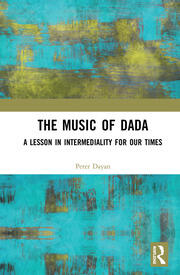 The Music of Dada: A lesson in intermediality for our times

100 years after the Dada soirées rocked the art world, the author investigates the role that music played in the movement. Dada is generally thought of as noisy and unmusical, but The Music of Dada shows that music was at the core of Dada theory and practice. Music (by Schoenberg, Satie and many others) performed on the piano played a central role in the soirées, from the beginnings in Zurich, in 1916, to the end in Paris and Holland, seven years later. The Music of Dada provides a historical analysis of music at Dada events, and asks why accounts of Dada have so consistently ignored music’s vital presence. The answer to that question turns out to explain how music has related to the other arts ever since the days of Dada. The music of Dada is the key to understanding intermediality in our time.

1. Music in Zurich Dada, 1916–1918 2. New York pre-Dada and its Parisian roots: music excluded from modern art 3. The last Zurich Dada soirée: music drowned out 4. Music and anti-music in Paris Dada, 1920–1923 5. The music of Dada follows Kurt Schwitters to Holland (bypassing Berlin) and ends in the Ursonate

"Peter Dayan’s book is a revelation: Dada was musical, and the music of Dada was often tonal, Romantic and popular in style. Dayan shows this to have been under the nose of Dada historians since the first Dada soirées but obscured by Dadaists through ideological difference, playful falsification, and Dada rules for (not) speaking about music. Ranging from New York pre-Dada to Richter’s Dadascope (1961), and driven by an insatiable appetite for questions and challenging assumptions (including his own), Dayan’s book is a major contribution to the field. Moreover – and more importantly, in Dada terms – it is also great fun."

"In this brilliant and timely book, Peter Dayan sheds valuable new light on a hitherto under-researched aspect of the Dada movement. He challenges many assumptions about what music meant to the Dadaists and the uses they made of it. He proposes myriad ways for us to understand anew the complex and at times surprising place that music occupied within the Dada groups. The fruit of meticulous research and lengthy reflection, this book summons forth an array of new insights into the composition, performance and reception of music across Dada’s various geographic locations and stylistic permutations. And in the process it compels us to think afresh about the melodies underpinning the other creative practices of Dada."

"Finally, a book that will have been long awaited by all performers of dada! In Peter Dayan’s highly convincing proposition I have found an affirmation for the way I have been realising many of my own performances. This is a fascinating elaboration on the widely neglected role of music in dada and its implications for the arts ever since. To the delight of the reader the author avoids pretentious ‘art speak’ and develops his perspective in an inviting and suspenseful manner."

"Dayan’s study undoubtedly makes essential reading for students of Dada, and will provide a significant cornerstone of Dada research for many years to come."

Richard Evans, In Defence of History