The Music of Malaysia
The Classical, Folk and Syncretic Traditions 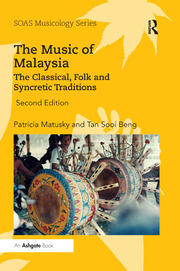 The Music of Malaysia: The Classical, Folk and Syncretic Traditions

The Music of Malaysia, first published in Malay in 1997 and followed by an English edition in 2004 is still the only history, appreciation and analysis of Malaysian music in its many and varied forms available in English. The book categorizes the types of music genres found in Malaysian society and provides an overview of the development of music in that country. Analyses of the music are illustrated with many examples transcribed from original field recordings. Genres discussed include theatrical and dance forms, percussion ensembles, vocal and instrumental music and classical music. It is an excellent introduction to and exploration of the country's vibrant musical culture.

This new, fully revised and updated edition includes time lines, listening guides and two audio CDs of field recordings that are analysed and discussed in the text.

1 Music of the Major Theatrical Forms

2 Music of the Major Dance Forms

3 Music of the Percussion Ensembles

Patricia Matusky is an ethnomusicologist and has taught for several years in Malaysia, including posts at the Universiti Sains Malaysia in Penang (1978-79, 1981-82 (Fulbright-Hays Lecturer in Music) and 1994-97 (Associate Professor), the University of Malaya in Kuala Lumpur (1983-86, 2013-16) and the LaSalle-SIA College of the Arts in Singapore (1990-93). Her degrees are Bachelor of Music, Master of Arts (Library Science), and Doctor of Philosophy in ethnomusicology from the University of Michigan (Ann Arbor, USA), and Master of Arts in musicology from Hunter College of the City University of New York. Her doctoral field research focused on music of the Malay shadow puppet theatre (wayang kulit) from the state of Kelantan (1975-76), while her continuing research involves Malaysian musical instruments, folk and classical Malay music in Peninsular Malaysia and music in Sarawak. Her publications include articles on the folk and classical music in Malaysia in international journals, and the books Malaysian Shadow Puppet Theatre and Music: Continuity of an Oral Tradition (Kuala Lumpur: Oxford University Press, 1993 and Penang, The Asian Centre, 1997), and she is co-author of Muzik Malaysia Tradisi Klasik, Rakyat dan Sinkretik (Kuala Lumpur: Asian Centre 1997 and University of Malaya Press 2012). She has contributed articles on folk and classical music of Malaysia in the Garland Encyclopedia of World Music (1998), in The New Grove Dictionary of Music and Musicians (2001), and on musical instruments of Malaysia in The Grove Dictionary of Musical Instruments (2014). She has contributed and annotated several hours of original field video recordings of Malaysian traditional musical/thearical performances, currently available for viewing, in the EVIA Digital Archive (Ethnomusicological Video for Instruction and Analysis Digital Archive) at Indiana University, Bloomington, Indiana, USA. She maintains active membership in many academic music societies and is currently the Chairperson of the ICTM Study Group on Performing Arts of Southeast Asia. Most recently she is Adjunct Professor of ethnomusicology at the Academy of Arts, Culture and Heritage of Malaysia (Akademi Seni, Budaya dan Warisan Malaysia (ASWARA), and at the University of Malaya Cultural Centre in Kuala Lumpur.

As a principal author in this publication project, she formulated the basic concept of the book and wrote on folk and classical music of the Malays and the indigenous groups in Sarawak.

is an ethnomusicologist and Professor in the Music Department of the Universiti Sains Malaysia in Penang. Her degrees are the Bachelor of Arts from Cornell University (USA), Master of Arts from Wesleyan University (USA) and Doctor of Philosophy in ethnomusicology from Monash University (Australia). Tan Sooi Beng planned and originally chaired the Bachelor of Arts degree in music at the Universiti Sains Malaysia. Her publications include several articles and a book entitled Bangsawan: A Social and Stylistic History of Popular Malay Opera (Singapore, Oxford University Press, 1993 and Penang, The Asian Centre, 1997). She is one of the co-authors of Longing for the Past, the 78 RPM Era in Southeast Asia (Atlanta, Dust-to-Digital, 2013) which won the joint SEM Bruno Nettl Prize, 2014. She has carried out extensive research and written articles on Peace Building through the Performing Arts (supported by Ford Foundation), Community Theatre in Southeast Asia and Japan (Asian Public Intellectual Fellowship, Nippon Foundation), Multicultural Traditions of Malaysia (USM Research Grant), Popular Music in Southeast Asia and the Chinese in Diaspora (Toyota Foundation). She is the Editor-in-Chief of Wacana Seni, Journal of Arts Discourse, serves in the Advisory Editorial Boards of Asian Music (USA) and Ethnomusicology Forum (UK), and is an elected member of the International Council for Traditional Music (ICTM). Tan is actively involved in the development of methodologies in applied ethnomusicology through community engagement and collaborative research.

Tan Sooi Beng proposed the idea of this book as a resource for information on traditional music and the analyses of folk, classical and syncretic music. She is also a principal author in this project, writing about syncretic music, Chinese music, and popular music in Malaysia.

'... an important addition to the literature on Southeast Asian performing arts. It is indispensable as a reference book for all serious students of Malaysian music and culture, and will provide scholars interested in the performance cultures of other Asian countries with vivid comparators and points of connection and exchange.' Aseasuk News

'... this book will serve as an excellent sourcebook or textbook for courses on the music of Southeast Asia.' Asian Folklore Studies

‘This useful book by two respected specialists is the first to encompass the folk, classical and syncretic music genres of Malaysia…There is no other source comparable for Malaysia, and thus this is an extremely valuable contribution.… a useful teaching tool and source of information on the major musical genres of Malaysia.’ Ethnomusicology Forum

‘This study is well-written, informative and an excellent resource for seminal work with under- and post-graduate students…The book is very well-edited, includes several pictures and gives many musical examples. A long bibliography and an exhaustive index round off the impression that this overview on Malaysian music is a very useful book indeed…’ Asien