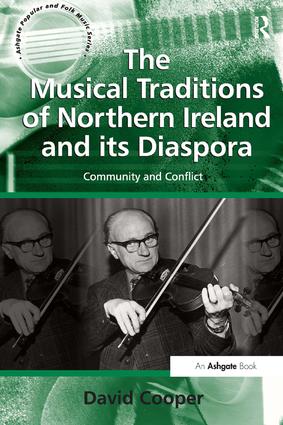 The Musical Traditions of Northern Ireland and its Diaspora

For at least two centuries, and arguably much longer, Ireland has exerted an important influence on the development of the traditional, popular and art musics of other regions, and in particular those of Britain and the United States. During the past decade or so, the traditional musics of the so-called Celtic regions have become a focus of international interest. The phenomenal success of shows such as Riverdance (which appeared in 1995, spawned from a 1994 Eurovision Song Contest interval act) brought Irish music and dance to a global audience and played a part in the further commoditization of Irish culture, including traditional music. However, there has been until now, relatively little serious musicological study of the traditional music of Northern Ireland. Northern Ireland remains a divided community in which traditional culture, in all its manifestations, is widely understood as a marker of religious affiliation and ethnic identity. Since the outbreak of the most recent 'troubles' around 1968, the borders between the communities have often been marked by music. For example, many in the Catholic, nationalist community, regard the music of Orange flute bands and Lambeg drums as a source of intimidation. Equally, many in the Protestant community have distanced themselves from Irish music as coming from a different ethnic tradition, and some have rejected tunes, styles and even instruments because of their association with the Catholic community and the Irish Republic. Of course, during the same period many other Protestants and Catholics have continued to perform in an apolitical context and often together, what in earlier times would simply have been regarded as folk or country music. With the increasing espousal of a discrete Ulster Scots tradition since the signing of the Belfast (or 'Good Friday') Agreement in 1998, the characteristics of the traditional music performed in Northern Ireland, and the place of Protestant musicians within popular Irish culture, clearly require a more thoroughgoing analysis. David Cooper's book provides such analysis, as well as ethnographic and ethnomusicological studies of a group of traditional musicians from County Antrim. In particular, this book offers a consideration of the cultural dynamics of Northern Ireland with respect to traditional music.

’Cooper's excellent book offers a timely investigation of the contrary point, purpose and political appropriation of music by Northern Irish Catholics and Protestants alike, both sharing a common heritage that each side bent to their own factional interests. … Cooper writes with intelligence and insight to tease open a history whose story is only just beginning to be told.’ 4 stars, Songlines ’… [a] groundbreaking and provocative work of scholarship.’ Popular Music 'Cooper highlights the intermingling of Scottish, English, and Irish music and song, the syntheses of oral and literary traditions, the variegated repertory of musicians and singers, the impact of different instruments on musical style and structure, and the importance of regional and local variations.' Music and Letters

David Cooper, Professor of Music and Technology in the School of Music and Dean of the Faculty of Performance, Visual Arts and Communications, University of Leeds.