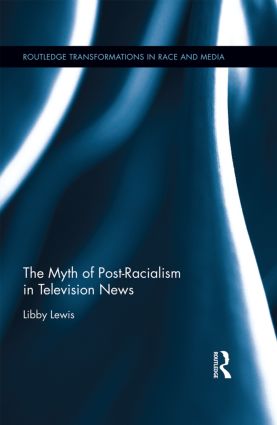 The Myth of Post-Racialism in Television News

This book explores the written and unwritten requirements Black journalists face in their efforts to get and keep jobs in television news. Informed by interviews with journalists themselves, Lewis examines how raced Black journalists and their journalism organizations process their circumstances and choose to respond to the corporate and institutional constraints they face. She uncovers the social construction and attempted control of "Blackness" in news production and its subversion by Black journalists negotiating issues of objectivity, authority, voice, and appearance along sites of multiple differences of race, gender, and sexuality.

"Libby Lewis has provided an essential tool in giving agency and voice to the many Black journalists who have tirelessly worked to provide complex representations of people of color in their stories and news organizations."

"The book’s argument is strengthened by firsthand accounts by TV journalists who discuss their experiences with management decisions, including promotions and management of African American journalists within media corporations. Lewis also underscores the complexity of the newsroom environment for black female journalists. The focus of the book is about not just journalists, but also media portrayals of blackness, especially as observed in reporting on Barack and Michelle Obama. Lewis offers a convincing case that the myth of postracialism is nothing but a myth, and that the reality of American journalism is filled with examples of marginalization of African Americans."

the television news industry. (…) Lewis’s book represents a timely contribution, as we need insights into the seeming paradox of heightened aspirations of racial transcendence celebrated during Obamamania and the invisible hand of Whiteness that ultimately influence social transactions between Black journalists and their White counterparts."

Introduction 1. Professionalizing and Palatable "Blackness" 2. Branding and Marketing "Blackness" 3. From Stumbling Block to Stepping Stone 4. Owning the "Ghetto" Shows 5. Rules of Engagement: The Politics of Race, Gender, and Sexuality 6. Barack and Michelle Obama as Signs of Progress and Threat Concluding Remarks

Routledge Transformations in Race and Media

Today, media consumption, production and circulation are more globally connected at the interpersonal, organizational, and geopolitical level than ever before. Greater numbers of media forms exist, representing a notable diversity in form and function, use, and reception. Yesterday’s passive media consumers are increasingly more active media producers.

These transformations in media are significant, and become all the more provocative and important when recognizing that race is shaped in and through media. This series publishes scholarship at the cutting edge of race and media with an aim not only to reflect current research, but to reshape and define future research at their intersection. Books in the series work to develop a greater understanding of how the mediated experiences of racialized beings will continue to transform human experience and relations in every aspect of daily life.