The Nationality of Utopia
H. G. Wells, England, and the World State 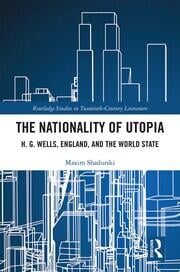 The Nationality of Utopia: H. G. Wells, England, and the World State

Since its generic inception in 1516, utopia has produced visions of alterity which renegotiate, subvert, and transcend existing places. Early in the twentieth century, H. G. Wells linked utopia to the World State, whose post-national, post-Westphalian emergence he predicated on English national discourse. This critical study examines how the discursive representations of England’s geography, continuity, and character become foundational to the Wellsian utopia and elicit competing response from Wells’s contemporaries, particularly Robert Hugh Benson and Aldous Huxley, with further ramifications throughout the twentieth century. Contextualized alongside modern theories of nationalism and utopia, as well as read jointly with contemporary projections of England as place, reactions to Wells demonstrate a shift from disavowal to retrieval of England, on the one hand, and from endorsement to rejection of the World State, on the other. Following Huxley’s attempts to salvage the residual traces of English culture from their abuses in the World State, England’s dissolution in the throes of alterity takes increasing precedence over the visions of a post-national world order and dissents from the Wellsian utopia. This trend continues in the work of George Orwell, Anthony Burgess, J. G. Ballard, and Julian Barnes, whose future scenarios warn against a world without England. The Nationality of Utopia investigates utopia’s capacity to deconstruct and redeploy national discourse in ways that surpass fear and nostalgia.

Chapter 2. The Wellsian Utopia and the Discourse of England

Chapter 4. England Redeemed: The Road, the Rose, and the Dream

Chapter 5. The End of England: Eugenics, Landscape, and Recollection

Maxim Shadurski holds a PhD in English Literature from the University of Edinburgh. He is the author of Literary Utopias from More to Huxley: The Issues of Genre Poetics and Semiosphere. Finding an Island (2007) and Utopia as a World Model: The Boundaries and Borderlands of a Literary Phenomenon (2016), as well as essays on utopia, nationalism, and landscape. He edits The Wellsian: The Journal of the H. G. Wells Society and serves as an academic advisor for the Gale/Cengage publishing group. He is an Associate Professor of Literary Theory and Comparative Studies at Siedlce University (Poland).

"H. G. Wells was a profoundly English writer who championed an ideal of world citizenship. Maxim Shadurski's examination of this paradox is both searching and timely. It should be read by anyone interested in Wells and in the reflections of nationality in modern utopian writing."

"This is an excellent study of England as a contemporary place and England as a futuristic state of mind converging in the works of H. G. Wells, undoubtedly one of the "Englishest" of all English writers. Maxim Shadurski revisits Wells’s "visions of alterity" with a fresh and insightful perspective and then aptly examines how these visions served as fodder for the dystopian writers of the following generations, including Aldous Huxley and George Orwell. Highly recommended!"

Thorough and insightful, The Nationality of Utopia explores productively the strange extent to which ideas of Utopia came to be conflated with ideas of England, offering innovative, persuasive views, throughout, of the authors and contexts concerned.

A landmark in Wells scholarship. No one has ever traced so effectively the importance of Englishness in Britishness in the work of a writer so engaged in questions of nationality and the global; especially impressive is the attention that The Nationality of Utopia gives to some of Wells's later, less considered works.

This splendid book locates H.G.Wells in the context of other contemporary and later utopian and dystopian fiction in England, stressing Wells' positive postnational vision, in contrast to the negative portrayals in the writings of a number of his contemporaries. The arguments are highly original and nuanced and the study makes a major contribution to utopian studies and to an understanding of twentieth-century literature and politics more broadly.

Shadurski’s study addresses Wellsian utopianism from two, we might think, opposite angles: nationalism, on the one hand, and Wells’s lifelong proselytising for a World State, on the other. It proves an illuminating pincer movement and facilitates a series of original and penetrating readings of several key Wellsian works. [...] there is no doubt that this book is a major intervention into both the study of Wells as a writer and thinker, and into utopian theory more broadly. Anyone interested in either field will want to seek it out, and future critical debate on both topics will need to take it into account.