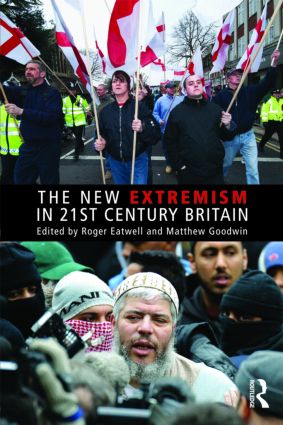 Since the 1990s, there has been a growing concern about the resurgence of extremist and radical movements in the Western world. Although a variety of challenges to the liberal democratic order have emerged, the main focus of concern among academics, policy-makers and practitioners within Europe and beyond has been on the growth and activities of Islamists and to a lesser extent the extreme right. However, these forms of extremism are seldom placed alongside each other, and in a manner that is sensitive to both the causes and consequences of extremist mobilization. This book presents new empirical research on the causes of these two ‘new’ extremisms in 21st Century Britain and the appropriate responses to it by both the state and civil society.

Both forms of extremism pose vital questions for those concerned with the development of a more cohesive and stable society. Unlike many studies, this volume adopts a holistic approach, bringing together experts from a variety of disciplines to examine the factors that cause support and the potential policy responses, including key questions such as:

Challenging broad assumptions and bringing together leading scholars in this rapidly developing field, this work is essential reading for all those with an interest in terrorism, fascism, political extremism, social cohesion and the future of race relations.

'[The New Extremism in 21st Century Britain] offers a fresh approach to understanding extremism, which other works in recent years have missed. The anthology is a timely contribution after the BNP sending its first elected members to European Parliament in 2009. The book is an excellent contribution to the study of extremism and radical British politics.' - Ryan Shaffer, Journal of British Studies, Vol. 51, 1, January 2012

‘This work is an ambitious attempt to examine in detail the causes and impacts of far right extremism alongside Islamist inspired extremism. Many may be uneasy about such comparisons but this volume lays to rest such concerns. Above all, it contains choice articles by a strong team of experienced researchers and commentators. There are superb contributions on state-group relations, policing issues and public attitudes. It should be consulted by all those interested in extremism in modern Britain.’ - Shamit Saggar, Professor of Political Science, University of Sussex

‘The New Extremism in 21st Century Britain is by far the most important consideration yet of the two principal extremist challenges to the existing political order, namely militant Islamism and far right politics. Eatwell and Goodwin have assembled an expert range of contributors to explore the causes, challenges and coping strategies associated with the rise of extremism in a hitherto largely benign polity. Chapters draw upon a range of attitudinal and electoral evidence to assess the levels of potential and actual support for the British National Party amongst the white working class and for Islamic militancy among British Muslims. Measured, informed and well-researched throughout, The New Extremism needs to be read by any student interested in the ongoing challenges to consensus in British politics.’ - Professor Jon Tonge President, Political Studies Association of the UK, University of Liverpool.

‘This book provides some real academic rigour to support the growing development and practice of community cohesion. It will help academics, policy makers and practitioners to understand how this agenda fits together and how national and local interventions in this complex but crucial area can be underpinned by empirical research.’ - Ted Cantle CBE, Executive Chair, Institute of Community Cohesion (iCoCo)

‘This book sheds considerable light on the causes and consequences of extremism in society. The evidence and argument presented by an expert set of authors is convincing and compelling. This book deserves a wide readership in academia and also among practitioners and policy-makers.’ - Professor Gerry Stoker, Centre for Citizenship, Globalization and Governance, University of Southampton.

‘For too long politicians have failed to understand, or chosen to ignore, the reasons for the rise of the BNP. It might make uncomfortable reading but Britain, and Britain’s politicians, need to wake up to the realities of the rise of Nick Griffin’s racist party. This book provides one of the most challenging and in-depth studies of the BNP. The authors lifted up the stone and peered beneath. It may be an unpleasant picture, but it must not be ignored.’ - Eric Pickles, Chairman of the Conservative Party

Roger Eatwell is Professor of Comparative European Politics at the University of Bath. His research has focused on a variety of issues relating to extremism, especially historic fascism and the contemporary extreme right.