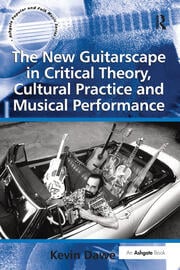 In The New Guitarscape, Kevin Dawe argues for a re-assessment of guitar studies in the light of more recent musical, social, cultural and technological developments that have taken place around the instrument. The author considers that a detailed study of the guitar in both contemporary and cross-cultural perspectives is now absolutely essential and that such a study must also include discussion of a wide range of theoretical issues, literature, musical cultures and technologies as they come to bear upon the instrument. Dawe presents a synthesis of previous work on the guitar, but also expands the terms by which the guitar might be studied. Moreover, in order to understand the properties and potential of the guitar as an agent of music, culture and society, the author draws from studies in science and technology, design theory, material culture, cognition, sensual culture, gender and sexuality, power and agency, ethnography (real and virtual) and globalization. Dawe presents the guitar as an instrument of scientific investigation and part of the technology of globalization, created and disseminated through corporate culture and cottage industry, held close to the body but taken away from the body in cyberspace, and involved in an enormous variety of cultural interactions and political exchanges in many different contexts around the world. In an effort to understand the significance and meaning of the guitar in the lives of those who may be seen to be closest to it, as well as providing a critically-informed discussion of various approaches to guitar performance, technologies and techniques, the book includes discussion of the work of a wide range of guitarists, including Robert Fripp, Kamala Shankar, Newton Faulkner, Lionel Loueke, Sharon Isbin, Steve Vai, Bob Brozman, Kaki King, Fred Frith, John 5, Jennifer Batten, Guthrie Govan, Dominic Frasca, I Wayan Balawan, Vicki Genfan and Hasan Cihat Ã–rter.

Kevin Dawe is Professor of Ethnomusicology and Head of the School of Music and Fine Art at the University of Kent, UK.

'Kevin Dawe has assembled an encyclopedic survey of the guitar's resonance in contemporary social life. It's not just guitarists and their sounds that he foregrounds, but all the activities, associations, ideas, and feelings that vibrate in tandem with the musicians and their music. The guitar is here unfolded with rich insight and unflagging enthusiasm.' William Washabaugh, University of Wisconsin-Milwaukee , USA ’This book should engage those interested not only in a comprehensive perspective of the guitar's influence in music culture and society but also in popular music in society. A valuable addition to music literature...Highly recommended.’ Choice '... Kevin Dawe successfully negotiates [between the twin positions of fan and scholar], providing a comprehensive and sophisticated introduction to the multi-faceted theoretical and cultural aspects of the guitar in the twenty-first century.' Notes