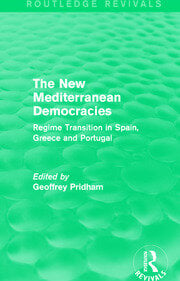 This volume, first published in 1984, discusses the viability of applying the ‘Mediterranean model’ to three countries that were transitioning to democracy, – Spain, Greece and Portugal – combining both comparative and national case-study approaches. In particular, Spain, Greece and Portugal offer comparable examples of the problems of establishing new democratic systems within relatively unstable and economically less developed environments.

This title applies different theories of regime transition to the countries in question. This volume will be of interest to students of politics.

Notes on the Contributors;  Comparative Perspectives on the New Mediterranean Democracies: A Model of Regime Transition?;  Part 1: The Process of Regime Transition: Three Parallel Roads to Democracy;  1. Spain’s Evolutionary Pathway from Dictatorship to Democracy  2. Transition to, and Consolidation of, Democratic Politics in Greece, 1974-83: A Tentative Assessment  3. Continuity and Change in Portuguese Politics: Ten Years after the Revolution of 25 April 1974;  Part 2: Party Systems and Party Development: Their Role in Democratic Transition;  4. Spain: Parties and the Party System in Transition  5. Political Parties in Post-Junta Greece: A Case of ‘Bureaucratic Clientelism’?  6. Social Cleavages and Electoral Performance: The Social Basis of Portuguese Political Parties, 1976-83;  Part 3: Comparative Themes of Regime Transition in Mediterranean Europe;  7. Southern European Socialism in Transition  8. The International Context of Democratic Transition  9. Government Performance: An Issue and Three Cases in Search of Theory;  Abstracts;  Index