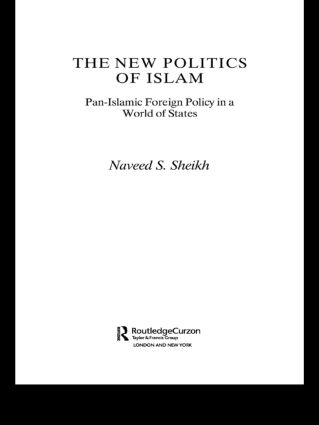 The New Politics of Islam

Pan-Islamic Foreign Policy in a World of States, 1st Edition

This is a timely study of the international relations of Islamic states, dealing both with the evolving theory of pan-Islamism from classical to post-caliphal times and the foreign-policy practice of contemporary states, especially Saudi Arabia, Iran and Pakistan, from the colonial period to the global aftermath of September 11. With a concise but analytic style, the book engages one-by-one with the questions of political theory, political geography and political sociology as they relate to international Islam. Its primary empirical investigation is centred on the Organization of the Islamic Conference (OIC), a powerful pan-Islamic regime, sometimes referred to as the 'Muslim United Nations'. In its theoretical deliberations on Islam and the postmodern condition, the book reconstructs contemporary understandings of how religious ideas and identities influence international politics in the Islamic world.

'This short, yet ambitious study by a Muslim scholar departs to a large extent from the bulk of the literature of its type … the author has a passionate style, with not infrequent wit and flair.' - International Affairs

'A significant contribution to the prevalent literature on Islam in the area of International Relations.' - Muslim World Book Review

Foreword Acknowledgements 1. Introductory Remarks: The Transcendental Ontology of the OIC 2. The Pan-Islamic Paradigm: Adjusting to the post-Caliphatic Order 2.1 Statement of Intention and Methodological Orientation 2.2 The Trans-Islamic Umma: Political Taxonomy and Epistemic Community 2.3 The Organization of the Islamic Conference: Catalyst, Conception, Inception 2.4 The Charter of the Islamic Conference: Etatism as Fait Accompli 3. A Geo-Political Genealogy of the OIC: The Secular Rationale 3.1 Statement of Intention and Methodological Orientation 3.2 The OIC and Saudi Foreign Policy: Depoliticizing International Islam 3.3 The OIC and Iranian Foreign Policy: Unilateral Multilateralism 3.4 The OIC and Pakistani Foreign Policy: The search for security 3.5 Comparitive Evaluation: A Triangle of Neutralization 4. Self-Identity in Foreign Policy: Bringing Islam Back In 4.1 Statement of Intention and Methodological Orientation 4.2 The Clash of Civilization: Reinventing "Geo Culturalism" 4.3 "Rhetorical Islam": The Dialectics of Rationale and Discourse 4.4 Post modern Pan-Islamism: The Synthesisof Rationality and "Aspirationality" 5. Concluding Reflections: A Mighty Myth-Rise, Demise and Resurrection 6. Appendix A: Member States of the OIC-Territory, Demography, Economy 7. Appendix B: The Institutional Structure of the OIC-A Comprehensive Listing 8. Appendix C: The Triangle of Neutralization: A Schematic Overview 9. Select Bibliography

Naveed Sheikh is Honorary European Trust Scholar at Churchill College and a doctoral candidate at the Centre of International Studies, University of Cambridge.