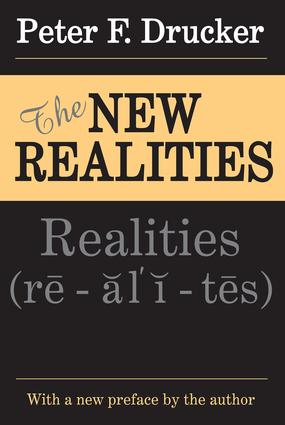 Challenging, insightful, and provocative, Peter Drucker's The New Realities anticipates the central issues of a rapidly changing world. When it was initially published, in 1989, some reviewers mistakenly thought The New Realities was a book about the future, or in other words, a series of predictions. But, as indicated in the title, the book discusses realities. Drucker argues that events of the next thirty to forty years, or even further on, had already largely been defined by events of the previous half-century. Thus, Drucker discusses episodes in world history that had not yet happened at the time of the book's initial publication, such as: the archaism of the hope for "salvation by society" in "The End of FDR's America"; the democratization of the Soviet Union in "When the Russian Empire is Gone"; the technology boom of the 1990s in "The Information-Based Organization"; and the evolution of management in "Management as Social Function and Liberal Art."

Graced with a new preface by the author that discusses both reactions to the original publication of the book and how important it is for decision-makers to consider the past and present when planning for the future, The New Realities is mandatory reading for understanding politics, government, the economy, information technology, and business in an ever-changing world.

2. No More Salvation by Society

3. The End of FDR's America

4. When Russian Empire is Gone

5. Now that Arms are Counterproductive

6. The Limits of Government

10. The Paradoxes of Economic Development

11. Economics at the Crossroads

15. Management as a Social Function

16. The Shifting Knowledge Base