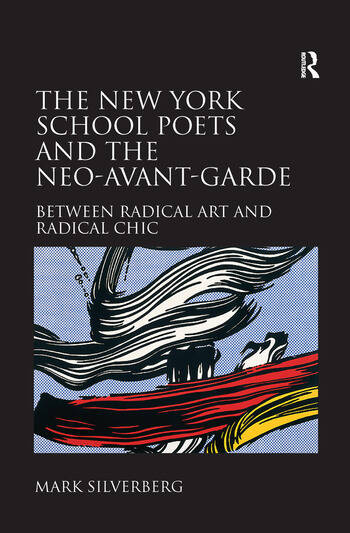 The New York School Poets and the Neo-Avant-Garde: Between Radical Art and Radical Chic

New York City was the site of a remarkable cultural and artistic renaissance during the 1950s and '60s. In the first monograph to treat all five major poets of the New York School-John Ashbery, Barbara Guest, Kenneth Koch, Frank O'Hara, and James Schuyler-Mark Silverberg examines this rich period of cross-fertilization between the arts. Silverberg uses the term 'neo-avant-garde' to describe New York School Poetry, Pop Art, Conceptual Art, Happenings, and other movements intended to revive and revise the achievements of the historical avant-garde, while remaining keenly aware of the new problems facing avant-gardists in the age of late capitalism. Silverberg highlights the family resemblances among the New York School poets, identifying the aesthetic concerns and ideological assumptions they shared with one another and with artists from the visual and performing arts. A unique feature of the book is Silverberg's annotated catalogue of collaborative works by the five poets and other artists. To comprehend the coherence of the New York School, Silverberg demonstrates, one must understand their shared commitment to a reconceptualized idea of the avant-garde specific to the United States in the 1950s and '60s, when the adversary culture of the Beats was being appropriated and repackaged as popular culture. Silverberg's detailed analysis of the strategies the New York School poets used to confront the problem of appropriation tells us much about the politics of taste and gender during the period, and suggests new ways of understanding succeeding generations of artists and poets.

Contents: Introduction: 'a lot of guys who know all about bricks'; The New York School and the problem of the avant-garde; The neo-avant-garde manifesto; The poetics of process; The politics of taste: comedy, camp, and the neo-avant-garde; Conclusion: beyond radical art; Appendix; Bibliography; Index.

Mark Silverberg is Associate Professor of American Literature at Cape Breton University in Sydney, Nova Scotia. His essays on twentieth century literature and culture have appeared in journals such as English Studies in Canada, Arizona Quarterly, and Contemporary Literature.

'This book is the first to take it as a given that O'Hara, Ashbery and Schuyler are quite probably the greatest poets of the second half of the twentieth century. As such, it lifts the critical debate to a new level. This stimulating, intellectually hospitable and user-friendly study will interest long-time and first-time readers alike, and should stand for decades as a quotable resource.' Geoff Ward, Royal Holloway College, University of London, UK

’Mark Silverberg’s study of the New York School as a neo-avant-garde offers an incisive account of how the school’s transformation of avant-garde practices informs its poetics, politics, and history: smart, well-written, and well-conceived, it sets the new gold standard on the New York School.’ Susan Rosenbaum, Associate Professor of American Literature, University of Georgia. Author of Professing Sincerity: Modern Lyric Poetry, Commercial Culture, and the Crisis in Reading (2007)

’...a reliable introduction to five poets who had, at least, one another, a city or two, and a set of fine painters in common; five poets the future is going to continue to read.’ Times Literary Supplement

'I was impressed overall by the book's breadth of reference, sensitivity of interpretation and the rich thesis that shone throughout. ... Silverberg's beautiful readings of James Schuyler's poetry are a major advance in the critical literature, given the scandalous paucity of attention paid to this quietly innovative writer. The New York School Poets and The Neo-Avant-Garde will surely become a primary reference point for scholars, students and lovers of the New York School, as it will prove an audacious redefinition of the neo-avant-garde as slippery, seductive and powerfully indifferent.' Review of English Studies