The Nineteenth-Century Child and Consumer Culture 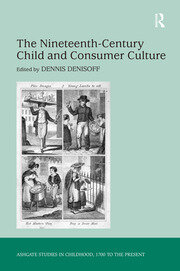 The Nineteenth-Century Child and Consumer Culture

During the rise of consumer culture in the nineteenth century, children and childhood were called on to fulfill a range of important roles. In addition to being consumers themselves, the young functioned as both 'goods' to be used and consumed by adults and as proof that middle-class materialist ventures were assisting in the formation of a more ethical society. Children also provided necessary labor and raw material for industry. This diverse collection addresses the roles assigned to children in the context of nineteenth-century consumer culture, at the same time that it remains steadfast in recognizing that the young did not simply exist within adult-articulated cultural contexts but were agents in their formation. Topics include toys and middle-class childhood; boyhood and toy theater; child performers on the Victorian stage; gender, sexuality and consumerism; imperialism in adventure fiction; the idealization of childhood as a form of adult entertainment and self-flattery; the commercialization of orphans; and the economics behind formulations of child poverty. Together, the essays demonstrate the rising investment both children and adults made in commodities as sources of identity and human worth.

Dennis Denisoff is a Research Chair in Nineteenth-Century Literature and Culture at Ryerson University, Toronto, Canada.

'From its scene-setting introduction to its closing studies of dead and dying children, this collection is a compelling read that offers new ways of thinking about such nineteenth-century phenomena and institutions as the family, the children's book, the theater, toys, imperialism, and sensation fiction. In the process, it offers a salutary reminder that neither consumer culture not the festishization and commodification of youth is a new phenomenon, while highlighting continuities between adults and children, past and present, and the nexus of desire surrounding constructions of childhood then and now.' Kim Reynolds, University of Newcastle upon Tyne, UK