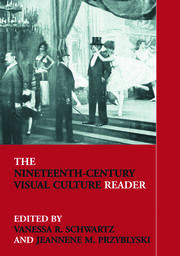 This Reader brings together, for the first time, key writings about the nineteenth century, a key period in contemporary discussion of visual culture.

Exploring such topics as photographs, exhibitions and advertising the editors suggest that 'modernity' rather than 'modernism' is a valuable way of understanding the changes particular to the visual culture of the time, and they investigate a variety of nineteenth-century images, technologies and visual experiences.

With three specially-written essays about definitions of visual culture as an object of study, the book examines genealogies and introduces key writings about culture from writers living in the nineteenth century itself or from those who scrutinized its visual culture from early in the twentieth century such as Walter Benjamin and Siegfried Kracauer.

Selections include well-known authors and new research by younger scholars to produce a well-balanced and comprehensive collection.

1. Visual Culture and Disciplinary Practices  2. Genealogies  3. Technology and Vision  4. Practices of Display and the Circulation of Images  5. Cities and the Built Environment  6. Inside and Out: Seeing the Personal and the Political