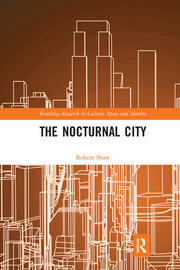 Night is a foundational element of human and animal life on earth, but its interaction with the social world has undergone significant transformations during the era of globalization. As the economic activity of the ‘daytime’ city has advanced into the night, other uses of the night as a time for play, for sleep or for escaping oppression have come increasingly under threat.

This book looks at the relationship between night and society in contemporary cities. It identifies that while theories of ‘planetary urbanization’ have traced the spatial spread of urban forms, the temporal expansion of urban capitalism has been less well mapped. It argues that, as a key part of planetary being, understanding what goes on at night in cities can add nuance to debates on planetary urbanization.

A series of practices and spaces that we encounter in the night-time city are explored. These include: the maintenance and repair of infrastructure; the aesthetics of the urban night; nightlife and the night-time economy; the home at night; and the ecologies of the urban night. Taking these forward the book will ask whether the night can reveal some of the boundaries to what we call ‘the urban’ in a world of cities, and will call for a revitalized and enhanced ‘nightology’ to study these limits.

How is the world urban? Contemporary urban theory

Urban machines: environment, society and the self

Night and the limits of the city

People who go bump in the night: the nocturnals

Fragmentation and affects of incessancy on the edge of the city

Artificial lighting as a condition of nocturnal possibility

Light pollution, carbon use and the ecological impacts of the night-time city

Beyond lighting: infrastructural frontiers at night

Living with darkness: infrastructure and the possibilities of urban expansion

Booze, bingeing and beer: the night-time economy in the UK

Creating nightlife: the emergence of the British night-time economy

Chapter 5 Aesthetics of the night-time city

Walking, exploration, graffiti: a counter-aesthetics of the night?

Cities at night and place marketing

Shaping the domestic night: from comfort to control

Home: at the edge of urban and beyond

Chapter 7 Towards nightology and the temporal limits to urbanism

Planetary urbanization: many cities, many planets

Three narratives of the urban–world–night relationship

Robert Shaw is a lecturer in geography at Newcastle University, UK. He received his PhD from Durham University in 2012, and he subsequently worked at Durham until 2015, before joining Newcastle. With his research interests in the urban night, he has explored the production of night-time city life in the UK, changing street-lighting technologies and most recently the Nuit Debout protest movement in Paris. His work has also been published in several academic journals. His personal webpage is www.rob-shaw.net, and he can be found on Twitter as @WhatIsRobShaw.

"Shaw’s book explores the way humans interface with the darkness that night brings while making the argument that the night should be, in and of itself, an object of research. The book takes the reader on a journey over time and space through the urban night. Throughout the book issues of race, gender, and sexuality are addressed. While the author notes there are “some gaps”, this book provides a fairly comprehensive survey of geographical and social theories and research about the human experience at night.  Further chapters in the book introduce such concepts as light pollution, nocturnal ecologies, the night-time economy, and the domestic night.  The range of topics covered outlines just how much the night has an effect on both humans and ecological systems within the urban environment. -Robert Shaw, The Nocturnal City (London:  Routledge, 2018), pp. 126, ISBN: 9781138676404