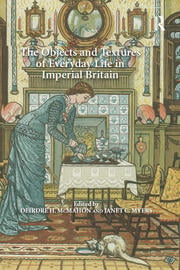 Focusing on everyday life in nineteenth-century Britain and its imperial possessions”from preparing tea to cleaning the kitchen, from packing for imperial adventures to arranging home décor”the essays in this collection share a common focus on materiality, the nitty-gritty elements that helped give shape and meaning to British self-definition during the period. Each essay demonstrates how preoccupations with common household goods and habits fueled contemporary debates about cultural institutions ranging from personal matters of marriage and family to more overtly political issues of empire building. While existing scholarship on material culture in the nineteenth century has centered on artifacts in museums and galleries, this collection brings together disparate fields”history of design, landscape history, childhood studies, and feminist and postcolonial literary studies”to focus on ordinary objects and practices, with specific attention to how Britons of all classes established the tenets of domesticity as central to individual happiness, national security, and imperial hegemony.

Part 1: Mapping Domestic Territories  1. The Tangible Shape of the Nation: The State, the Cheap Printed Map, and the Manufacture of British Identit, 1784 - 1855.  2. The Material Stability: Conforming to Type in British House Furnishings, 1860-1910.  3. The Material Lessons of Children's Literature: Unearthing Class Standards in E. Nesbit's The Story of the Treasure Seekers.  Part 2: Hearth, Home, and Housekeeping  4. Housekeeping: Shine, Polish, Gloss and Glaze as Surface Strategies in the Domestic Interior.  5. Kitchen Magic: Reforming the Victorian Kitchen with Alexis Soyer.  6. Tea Gender and Middle-Class Taste.  Part 3: Imperial Possessions, Community Culture and Colonial Return  7. "A cross, a lion and a scroll or two": The Victorial Cross and the Substance of British Identity.  8. Monkeys in the House: Commodities and Competing Fetishisms in Late Victorian Popular Culture.  9. Lady Montagu's Smokers' Pastils and The Graphoc Advertising the Harem in the Home.

'This lively and inventive collection of essays demonstrates how nineteenth-century British people’s changing sense of themselves and their relationship to the rest of the world was made through their everyday engagement with material objects - from reading cheap printed maps, to polishing dusty sideboards and slaving over kitchen stoves. Bristling with fresh insights, it pioneers new approaches to the study of Victorian things to reveal the complex and contradictory ways that relationships of class, ’race’ and gender were lived and imagined and illustrates how home, nation and empire were bound together in imperial Britain. This agenda-setting, multidisciplinary volume will be an inspiration to all scholars interested in the relationships between domesticity, empire and Britishness.' Alastair Owens, Queen Mary University of London, UK