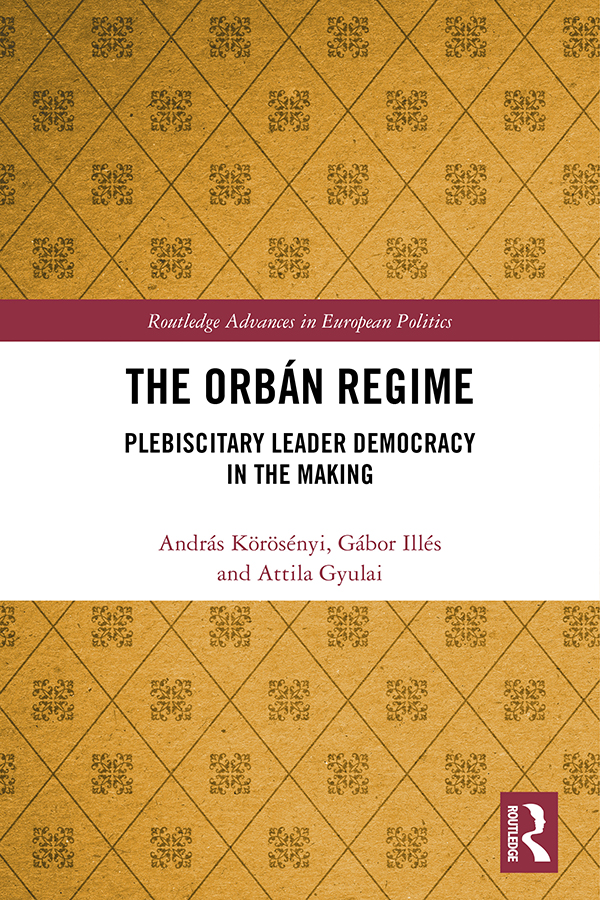 This book gives the first comprehensive and theoretically substantiated political science account of the Orbán regime in English.

It argues that Viktor Orbán’s regime-building and reconstructive leadership is more than just an example of hybridisation, a successful populist appeal or a backlash against the earlier neoliberal hegemony in Central Europe. It unfolds the major traits of the Orbán regime and argues that it provides a paradigmatic case of the Weberian model of plebiscitary leader democracy (PLD). Beyond explaining the backslide of liberal democracy in Hungary, the book aims at two additional contributions of wider significance. First, by applying the concept of PLD to the Hungarian case, it reveals that the authoritarian elements are products of an endogenousdrive of modern mass democracy. Second, through the glass of PLD, the Orbán regime can be seen as an experimental lab of global trends like mediatisation and personalisation of politics, populist style, the deconsolidation of liberal democratic order, and what is often labelled as "post-truth politics".

This book will be of key interest both to scholars and students of Hungary, Post-communist and Central and East European politics and to those interested in populism, democratisation and democratic deconsolidation as a broader trend in a variety of countries.

1. Introduction: The analytical framework and the concept of plebiscitary leader democracy

2. The pre-history and context of the Orbán regime

4. Rebuilding the polity: Constitutional tinkering, institutional reorganization, and the informal functioning of the government

6. PLD: A regime type of permanent motion and politicisation

András Körösényi is a Senior Research Fellow at the Centre for Social Sciences, Eötvös Loránd Research Network, and Professor and Head of the Political Science Doctoral School at Corvinus University of Budapest, Hungary.

is an Assistant Lecturer at the Institute for Political Science, Faculty of Law, Eötvös Loránd University, and Junior Research Fellow at the Centre for Social Sciences, Eötvös Loránd Research Network, Budapest, Hungary.