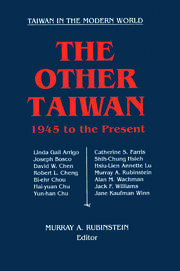 Examines the effects of the socio-economic post-war transformation on Taiwan's political system, environment, religious structures, the relationships between the sexes and the different ethnic populations. A complex revisionist portrait of the country emerges.

Racism has existed throughout the world for centuries and has been at the root of innumerable conflicts and human tragedies, including war, genocide, slavery, bigotry, and discrimination. Defined broadly, racism has had many forms and effects, from caste prejudice in India and mass extermination in Tasmania to slavery in the Americas and the Holocaust in Europe. Put simply, racism has been one of the overriding forces in world history for more than a millennium. This book provides a global perspective of racism in its myriad forms. Consisting of twelve parts and fifty-one articles, it focuses on racism worldwide over the past thousand years. It includes three types of articles: original documents, scholarly essays, and journalistic accounts.