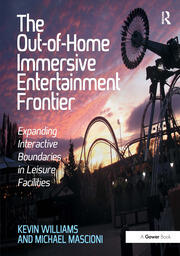 Digital Out of Home Entertainment is rather an arcane description for one of the fastest growing technology-sectors. These forms of interactive technology, often established on a 'pay per use' basis are transforming the customer experience in shops, cinemas, museums; almost any environment where consumers are congregating. Kevin Williams and Michael Mascioni's The Out-of-Home Immersive Entertainment Frontier provides a 'state of play' exploration of the successes, the emerging new applications and the strategies that inform them. The authors interviewed nearly 70 leading executives from many familiar organisations in every facet of the digital out-of-home entertainments industry. The result is an essential guide for entertainment executives as well as those involved in retailing, the hotel industry, mobile communications, museums and heritage.

Kevin Williams has amassed a unique experience of the past and present of the industries that are defining themselves as key to the DOE arena - after leaving school, he has worked with leaders in amusement, commercial and military simulation, virtual reality, theme parks, game software and CGI technology. Possessing an incredible background of working on both sides of the business table as developer, manufacturer and originator - he is one of the unique group of past Walt Disney Imagineers. A well-known commentator in the trade media including InterGame, Replay Magazine, Vending Times and Arcade Heroes, he also publishes his own provocative news service and is a veteran moderator and presenter on the aspects that drive this market and related markets. From his position in the digital out-of-home entertainment sector, he has championed the non-traditional opportunities this sector affords. Michael Mascioni is a market research consultant, writer, and conference planner in digital media. He has researched topics such as digital out-of-home interactive entertainment, video games, interactive TV, online entertainment, and interactive compact discs for such companies as the IMAX Corporation, Triotech, Thinkwell Group, Sony Pictures, HBO, and Paramount Communications. He served as a senior analyst in the broadband entertainment group at Strategy Analytics, and was a research associate in consumer electronics at LINK Resources. He has written articles on digital media for such publications as Funworld, Intergame, Daily DOOH, Digital Signage Today, Digital2Disc, Internet Evolution, and Inter Park. He served as the project manager of the 2012 DNA/US digital out-of-home interactive entertainment conference and program manager of the 2013 DNA/UK Seminar. He was program director of the Intertainment conferences on interactive entertainment and managing editor of the A&A Monthly on Interactive Entertainment.

’Kevin Williams and Michael Mascioni provide a masterful overview of digital out-of-home entertainment. Combining deep historical knowledge of pay-for-play amusement technology and business structures with penetrating expertise regarding current developments, the authors brilliantly answer three critical questions: What’s really happening in the field today? What does it mean? Where is it going? I’m delighted to offer an enthusiastic five-star endorsement!’ Marcus Webb, Chief Storytelling Officer, TEDMED ’A joyride into the past, present, and future of Out-Of-Home interactive entertainment. The historical backdrop, including ample wisdom from pioneers (such as Nolan Bushnell) provides a needed reference to separate the overhyped chaff this sector is known for, from the brainstorms that will form the attractions of the future. Strap on your HMD, damn the latency and motion blur, and prepare to voyage into the bold future of interactivity.’ Eugene Jarvis, Raw Thrills Inc., USA ’[This book] informs, inspires and provides a context for all business planning related to communications and consumer engagement. In providing a comprehensive history, status and the outlook for high-engagement media, the authors have left no stone unturned. The result is a clear picture of how visual engagement media got to its current state, but more important, it enables the readers’ extrapolation to future directions and trends. ... This book is at the top of my recommended reading list. Give copies to your investors, management, colleagues, partners and prospects.’ Lyle Bunn, independent analyst, advisor and educator in the digital place-based and enterprise media sectors 'What an interesting book ... belongs on the shelves of industry insiders, those who want to see the expansion of what we think of digital-out-of-home, and those who are trying to make it happen. ... What makes this book a worthy read is that those in the other verticals can gather a lot of insight f