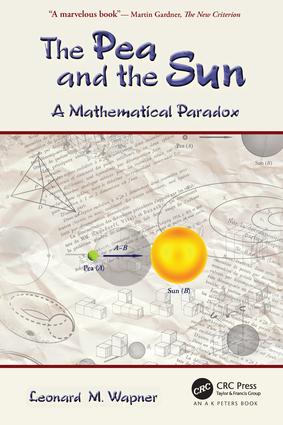 The Pea and the Sun

Take an apple and cut it into five pieces. Would you believe that these five pieces can be reassembled in such a fashion so as to create two apples equal in shape and size to the original? Would you believe that you could make something as large as the sun by breaking a pea into a finite number of pieces and putting it back together again? Neither did Leonard Wapner, author of The Pea and the Sun, when he was first introduced to the Banach-Tarski paradox, which asserts exactly such a notion. Written in an engaging style, The Pea and the Sun catalogues the people, events, and mathematics that contributed to the discovery of Banach and Tarski's magical paradox. Wapner makes one of the most interesting problems of advanced mathematics accessible to the non-mathematician.

" … engaging, thorough, and fascinating explanation of one of mathematics' most perplexing paradoxes. Wapner's book is a skillful blend of history, mathematics, and philosophy that will please both mathematicians and the merely math curious."" -Keith Devlin, Stanford University, April 2005
""The author gives a fascinating account, in a journalistic style, of the history of the Banach-Tarski Theorem, devoting a chapter to the cast of characters, including Georg Cantor, Kurt Gödel, Paul Cohen, and of course Stefan Banach and Alfred Tarski. . . .What is presented in this book is maths for its own sake: beautiful, elegant, artistic, astonishing. . . . it would surely make a great present for a budding pure mathematician - and what a present it would be, to give someone their first inkling of the wonders that lie at the heart of pure mathematics."" -Helen Joyce, Plus Magazine, September 2005
""Written in a fresh, captivating, friendly style, The Pea And The Sun is remarkably engaging and will appeal to any reader with a discerning, inquisitive mind into the nature of the so-called impossible, regardless of their particular mathematical background."" -Bookwatch, October 2005
""Leonard Wapner, Professor of Mathematics at El Camino College in Torrance, California, makes the BT paradox the centerpiece of a marvelous book (his first, by the way)."" - Martin Gardner -Martin Gardner, The New Criterion, October 2005
""…the book has a little something for everyone."" -J.M. Plotkin, American Mathematical Society, November 2005
The Pea and the Sun makes Librarian's Choice in Non-Fiction for 2005 -Librarian's CHOICE Magazine , January 2005
""Wapner reaches out and tries to explain a truly amazing result to an audience without serious mathematical training. He keeps the reader interested and he explains some very interesting things about set theory in particular and mathematics in general."" -Kenneth R. Davidson, CMS Notes, February 2006
""This book is sure to intrigue, fascinate, and challenge the mathematically inclined reader."" -Mathematics Teacher, May 2006
Wer Einblick in die Schönheit und Eleganz der theoretischen Mathematik erlangen möchte, aber nur ein einziges Buch lesen will, dem sei Wapners Werk wärmstens empfohlen. -George Szpiro, NZZ am Sonntag, January 2006
""One does not need to have a degree in mathematics in order to follow the lively and readable, highly intriguing story of the paradox. Yet the exposition is serious, correct and comprehensive, and it presents a detailed proof of the result. The presentation is light-hearted, highly entertaining and illustrated with many examples, puzzles, etc. This book is (already) a classic in an area that needed one."" -Newsletter of the European Mathematical Society , June 2006
""The book is written in a fashion that is easily understood by non-mathematicians, providing a popular discussion of this bizarre paradox, little known outside the mathematical community."" -Efstratios Rappos, Zentralblatt MATH 1080, June 2006
""The book is well written and entertaining."" -Peter Komjath, Notices of the AMS, October 2006
""In his immensely engaging book… Wapner has chosen as the basis for his book the Banach-Tarski Paradox: quite simply, the finest paradox in all of mathematics."" -John J. Watkins, The Mathematical Intelligencer , July 2006
""With some real substance as well as plenty of entertainment, all elegantly packaged and lucidly presented, The Pea and the Sun is a cut above most popular mathematics books."" -Danny Yee, Danny Yee's Book Reviews, October 2006
""Very readable and aimed at non-technical readers … an ideal book for undergraduates or sixth form students."" -Anthony C. Robin, The Mathematical Gazette, November 2006
""The Banach-Tarski theorem states, in everyday words, that it is possible to take a sphere, partition it into a finite number of pieces, and reassemble those pieces into two spheres each the same size as the original. What?! Doesn't that violate several laws, or something? Well, yes it would, in the physical world, but these are mathematical spheres, which can behave in apparently paradoxical ways. Wapner, in this lovely little book, builds up to the statement and proof of the theorem in a very gentle manner. By the end, you understand how the theorem could possibly be true, and why not to bother trying to use it to get rich by doubling golden balls. "" -Susan Stepney, Susan Stepney, August 2008
""Where Wapner diverges from the canonical popular maths book types is in his decision to present, in detail, the proof of the Banach-Tarski theorem . . . Wapner's goal is a very ambitions one! The proof presented is complete and is certainly accessible to any later-year undergraduate student . . . ."" -The Australian Mathematical Society Gazette, January 2006
""… a very well-written introduction to the Banach-Tarski Theorem. The mathematical exposition is sound, but simple. The prose is lively and entertaining. It is a pleasurable read that is accessible to all students of mathematics."" -James V. Rauff, Mathematics and Computer Education, March 2009"