The Philosophy of Heidegger 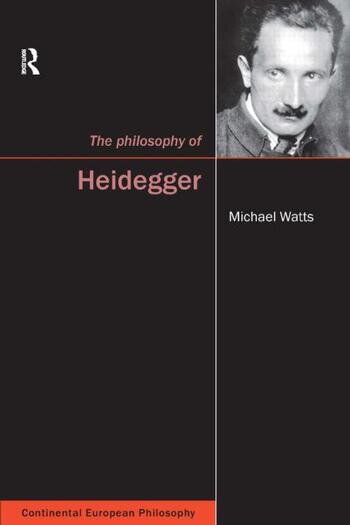 The Philosophy of Heidegger

"The Philosophy of Heidegger" is a readable and reliable overview of Heidegger's thought, suitable both for beginners and advanced students. A striking and refreshing feature of the work is how free it is from the jargon and standard idioms of academic philosophical writing. Written in straightforward English, with many illustrations and concrete examples, this book provides a very accessible introduction to such key Heideggerian notions as in/authenticity, falling, throwness, moods, temporality, earth, world, enframing, etc. Organized under clear, no-nonsense headings, Watt's exposition avoids complicated involvement with the secondary literature, or with wider philosophical debates, which gives his writing a fresh, immediate character. Ranging widely across Heidegger's numerous writings, this book displays an impressively thorough knowledge of his corpus, navigating the difficult relationship between earlier and later Heidegger texts, and giving the reader a strong sense of the basic motives and overall continuity of Heidegger's thought.

1. Heidegger's Life 2. The meaning of life: The question of Being 3. The central ideas in Being and Time 4. Conscience, guilt and authenticity 5. Being-towards-death 6. Dasein's primordial temporality 7. Heidegger's "truth of Aletheia" and language 8. Poetry, poets and Holderlin 9. Art 10. Technology 11. Tao, Zen and Heidegger

"Watts does in general manage to achieve a very high overall level of clarity and accessibility; he plainly knows the primary texts well…there are passages and chapters -- I think here particularly of the chapter on temporality, and the discussion of 'ereignis' and 'enteignis' -- that achieve a really unusual degree of clarity and illumination in the brief compass allowed." - Notre Dame Philosophical Reviews

"This book explains Heidegger's work with admirable clarity and beautiful simplicity, rendering his most difficult ideas, thoroughly accessible and understandable. Throughout the book, Watts displays a deep understanding and an effortless mastery of the text at hand. All of which, expressed in a thoroughly lucid and engaging way." - Paulo De Jesus, Metapsychology

"Michael Watts tackles Heidegger with exemplary skill, tenacity and sobriety. He presents Heidegger's thoughts in plain uncluttered prose and steers the reader through the complexities of Heidegger's terminology. He gives an exceptionally clear and readable account of Being and Time, while also performing the difficult feat of weaving this into an account of Heidegger’s later writings. He provides valuable guidance for the beginner through the complexities of Heidegger’s thought and much of interest for those who are already ‘on the way’." - Michael Inwood, University of Oxford, UK

"A deep and wide knowledge of Heidegger's texts, an unusual ability to bring the issues alive and an unpretentious written style combine in The Philosophy of Heidegger in a truly impressive way." - Dan Watts, University of Essex, UK

"The merit of Michael Watts work – what I find particularly appealing about it – is his ability to grasp the abstruse and abstract nature of someone’s thought, and render it in clear, concise, and concrete terms. He is a master at this!" As a student in the sixties and seventies, the secondary sources on Heidegger that I consulted were mostly William Richardson, S.J., Thomas Langan, William Barrett, Alphonse De Waelhens, Henri Birault, Otto Poggeler, and few others. Had you been available at the time, these sources would have been monumentally superfluous." - Roy Martinez, Professor and Chair of the Department of Philosophy and Religion at Spelman College, Atlanta, USA

"To write clearly and accessibly, and yet to present a philosopher’s ideas without trivialising or distorting them requires considerable intellectual discipline. This challenge is, arguably, all the more severe in the case of philosophers such as Heidegger and Wittgenstein, who Watts rightly repudiates the notion, implied in some of what Heidegger wrote and put about by certain of his followers, that it is suicide for philosophy to be intelligible. Instead he sets about explaining, so far as is possible in such a short space, the main ideas in Heidegger’s masterpiece Being and Time. Watts also considers the later works in which Heidegger moves furthest from the argumentative canons of Western philosophy. That he treats these works charitably without ever aquiescing in the kind of dazed enchantment they induce in less discriminating minds is a sign that he has understood his responsibilities to the ‘newcomer’ very well." - Jonathan Derbyshire, Culture Editor of New Statesman and Managing Editor of Prospect