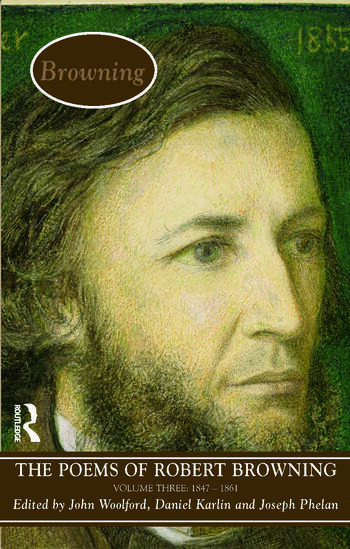 The Poems of Browning

is a multi-volume edition of the poetry of Robert Browning (1812 -1889) resulting from a completely fresh appraisal of the canon, text and context of his work. The poems are presented in the order of their composition and in the text in which they were first published, giving a unique insight into the origins and development of Browning's art. Annotations and headnotes, in keeping with the traditions of Longman Annotated English Poets, are full and informative and provide details of composition, publication, sources and contemporary reception.

Volumes one (1826-1840) and two (1841-1846) presented the poems from his early years up to his marriage to Elizabeth Barrett, including the dramatic poem Paracelsus (1835), which first brought him to wide attention, and Sordello (1840), which confirmed him as a poet of ambition and imagination.

Volume three (1847-1861) of The Poems of Browning covers the years of Browning's life in Italy with his wife Elizabeth Barrett Browning. During the fifteen years of his marriage and self-imposed exile, Browning produced Christmas-Eve and Easter Day (1850), a major statement of his religious philosophy, and Men and Women (1855), his greatest collection of shorter poems. The poems of Men and Women, like all Browning's work, are steeped in his wide and idiosyncratic knowledge of literature, music, art, history, and popular culture, but a new and distinctive touch comes from the sights, sounds and textures of ordinary life in Italy. Based on a comprehensive study of textual and contextual sources, including a significant amount of hitherto undiscovered or unpublished manuscripts of poems and letters, this volume offers the most complete and informative edition of works that are central to Browning's achievement. In addition, Browning's most important work of critical prose, the Essay on Shelley, is presented in an appendix with full annotation, and poems which refer to specific works of painting or sculpture are illustrated with colour plates.

Volumes four presents the poetry Browning produced during the decade following the death of his wife, including Dramatis Personae, which heralded a re-evaluation of his critical reputation, and The Ring and the Book, which many consider to be his greatest work. The Poems of Browning represents the most informative and up-to-date edition of the works of one of England's greatest poets.

is based at The University of Sheffield and his main research interest is Victorian poetry. His publications include Robert Browning (1996), which he wrote with John Woolford.

is a senior lecturer in English at De Montfort University.His publications include The Nineteenth-Century Sonnet (2005) and Clough: Selected Poems (1995).

is based at the Univeristy of Manchester. He haspublished two other books on Browning, Browning the Revisionary (1988) and Robert Browning(1996, with Daniel Karlin), together with many essays and articles.