The Police and the Expansion of Public Order Law in Britain, 1829-2014 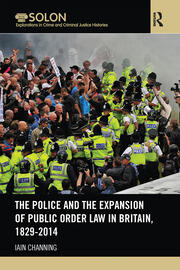 The Police and the Expansion of Public Order Law in Britain, 1829-2014

Incidences of public disorder, and the manner in which they have been suppressed, have repeatedly ignited debate on the role of policing, the effectiveness of current legislation and the implications for human rights and civil liberties. These same issues have reverberated throughout British history, and have frequently resulted in the enactment of new legislation that reactively aimed to counter the specific concern of that era. This book offers a detailed analysis of the expansion of public order law in the context of the historical and political developments in British society.

The correlation of key historical events and the enactment of consequent legislation is a key theme that resonates throughout the book, and demonstrates the expanding influence of the law on public assemblies and protest, which has continued to criminalise and prohibit certain social behaviours. Crucial movements in Britain’s social and political history who have all engaged in, or have provoked public disorder, are examined in the book. Other incidents of riot and disorder, such as the Featherstone Riot (1893), the Battle of Cable Street (1936), the Inner City Riots (1980s) and the UK riots (2011) are also covered.

By positioning legal developments within their historical context, the book demonstrates the ebb and flow between the prominence of the competing demands of the liberties of free expression and assembly on the one hand and the protection of the general public and property on the other. This book is essential reading for academics and students in the fields of criminology, history and law.

Introduction  Chapter 1. The Development of Public Order Law  Chapter 2. ‘I Predict a Breach of the Peace’: Police Discretion and the Tension between Liberty and Order  Chapter 3. Riot and Violent Disorder: Controlling Spontaneous Disorder and Excessive Police Violence  Chapter 4. Freedom of Assembly and Public Processions: Issues related to promoting opinions and provoking disorder  Chapter 5. Policing Public Processions after the Public Order Act 1936  Chapter 6. Public Meetings and Freedom of Expression: The Criminalisation of Words and Political Censorship  Chapter 7. Public Meetings held on Private Premises: The roles of the steward and the police  Chapter 8. Dressed for Disorder: The Criminalisation of Political Uniforms  Conclusion.

Iain Channing is an interdisciplinary researcher at Plymouth University. Dr. Channing's research traverses the fields of Law, Criminology and History and he has presented his research at various conferences around the UK. He is the Membership Secretary of SOLON and has a particular interest in the history of public order, political extremism and the police.

‘This is a timely study of the regulation of public order before and after the development of human rights legislation, showing the influence of both official - and especially secret - forms of policing on the control of public space. The longer perspective of two hundred years punctuated by incidents and "moments" in history creates a critical interdisciplinary chronology of public order legislation which will inform students and academics working in the history of law, criminology, and social history.’ - Barry Godfrey, Professor of Social Justice, Liverpool University, UK

‘A thought-provoking and impressively detailed survey of the often strained relationship between the law, policing, and public order in Britain over the last two centuries. Dr Channing is to be congratulated on his carefully researched and apposite interdisciplinary study. This book deserves to be required reading for those interested in the historical and legal balance between freedom of expression and public safety.’ - David J. Cox, Fellow of the Royal Historical Society and Reader in Criminal Justice History, University of Wolverhampton, UK

‘This is a very welcome study of the policing of public order in Britain. The book charts the relationship between the historical development of legislation, dealing with public order offences and the practice and application of that law on the ground. By taking a long view (from the passage of the Metropolitan Police Act 1829 to the present) this study offers an original and exciting analysis of the policing of public protest and political activism.’ - Dr Heather Shore, Reader in History, Leeds Beckett University, UK

'This scholarly, interdisciplinary account will appeal to professionals in the field with a legal bent and knowledge of British history. Summing Up: Recommended. Upper-division undergraduates and above.' -P. T. Smith, Saint Joseph's University, CHOICE Reviews, December 2015

"Channing examines key movements in Britain’s social and political history that have engaged in, or have provoked, public disorder. He argues that incidences of public disorder, and the manner in which they have been suppressed, have repeatedly ignited debate on the role of policing and the implications for human rights and civil liberties in Great Britain, often leading to the enactment of legislation that reactively aimed to counter the specific concern of that era." - Law and Social Inquiry Journal

"Whilst public order law has been a focus within the fields of law, criminology, history and sociology, there are few publications that place these legal developments within an extended chronology of historical contexts. It is in this way that Iain Channing’s book, The Police and the Expansion of Public Order Law in Britain, 1829-2014, is a welcome addition to the interdisciplinary study of this topic. Its regional study of the riots, protests and demonstrations that have taken place over the last three centuries in Britain allows for an analysis of how legal powers, police discretion and reactions to the crowds have affected the ways in which British police forces have enforced public order law." -Rhiannon Pickin