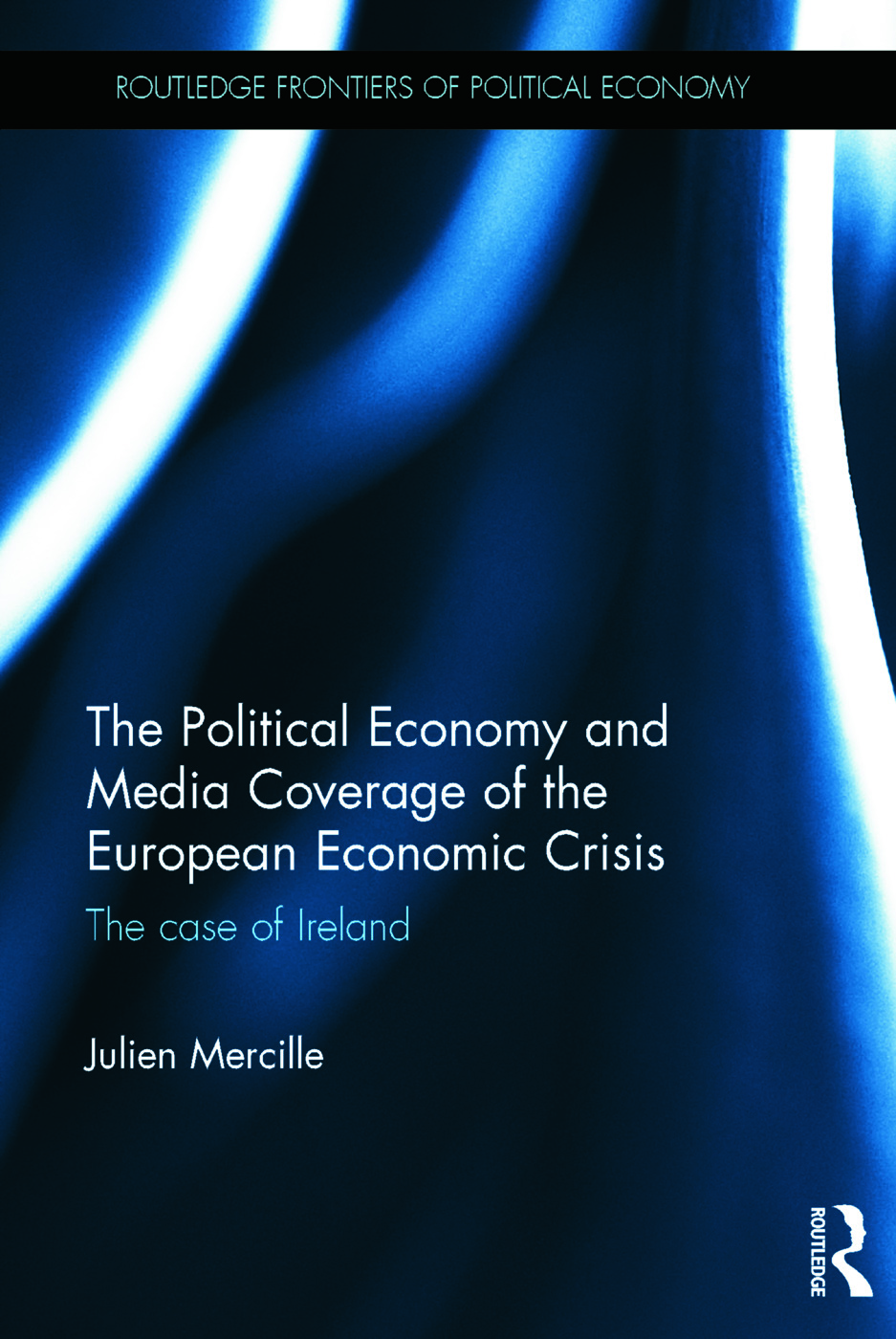 The Political Economy and Media Coverage of the European Economic Crisis

The case of Ireland, 1st Edition

The European economic crisis has been ongoing since 2008 and while austerity has spread over the continent, it has failed to revive economies. The media have played an important ideological role in presenting the policies of economic and political elites in a favourable light, even if the latter’s aim has been to shift the burden of adjustment onto citizens. This book explains how and why, using a critical political economic perspective and focusing on the case of Ireland. Throughout, Ireland is compared with contemporary and historical examples to contextualise the arguments made.

The book covers the housing bubble that led to the crash, the rescue of financial institutions by the state, the role of the European institutions and the International Monetary Fund, austerity, and the possibility of leaving the eurozone for Europe’s peripheral countries.

Through a systematic analysis of Ireland’s main newspapers, it is argued that the media reflect elite views and interests and downplay alternative policies that could lead to more progressive responses to the crisis.

Julien Mercille's deeply empirical study explains how the media in Ireland (and elsewhere) sidelined alternative views and protected the preferred policies of domestic elites. Anyone who cares about democracy and economic policy should read this book and be deeply worried by it.

-Mark Blyth, Professor of International Political Economy, Brown University and author of "Austerity: The History of a Dangerous Idea."

The world economy was being driven by housing bubbles in most major wealthy economies. When these bubbles burst, there was nothing to replace this massive source of demand, leading to a prolonged period of underemployment and stagnation. Julien Mercille tells this story well and explains the media's role in convincing the public that it was all very complicated and that government policy can do little to improve the situation.

D-ean Baker, Co-director of the Center for Economic and Policy Research

Mercille’s work is meticulous, balanced and clear and casts light on the media interests that have abetted the destruction of the Irish economy. This book is a model for similar research across the Eurozone periphery.

Julien Mercille has written a superb case study of the role of news media in shaping fundamental policy debates surrounding the economy, particularly during a time of crisis. It provides a model not only for examining the Irish or European press, but the news media across the world. The political implications for those concerned with having a solid and sustainable economy, and a vibrant democracy, could not be more clear.

This book provides compelling evidence on the ideological role of the media in the presentation of the policies favouring the economic, financial and political elites. A highly recommended read for its analyses of the crises and of the neo-liberal interpretation from the media.

This is an engaging, lively, critical and comparative account of how the Irish media has sought to shape public opinion to match that of its corporate and political owners, sponsors, and sources. A must read for all those interested in how media coverage of economic crises seeks to set the discursive terrain for wider political and public response."

Julien Mercille shows how the Irish media, notably including the public service broadcaster, has consistently supported policies that favour elites and disfavour most people, notably people in disadvantaged communities. And that the Irish media do so even more flagrantly than the media elsewhere.

This is one of the most important political economy books of the year. It is set to become the definitive account of the media’s role in Ireland’s spectacular and transformative economic boom and bust.

This is an exceptionally rare example of an academically rigorous analysis forcing the powerful light of transparency and exposure into the murky world of Irish policy advocacy and punditry. In a society where few are brave enough to defy the state-sponsored ideology of statism and corporatism, Mercille courageously exposes as sham the very foundations of our public policy discourse: the belief of objectivity and infallibility of Ireland's intellectual elites."

Julien Mercille delivers both a stinging critique of how Irish media narrowed the debate on crisis and austerity and a comprehensive analysis of that limited public discourse.

This bookis an invaluable concise history of Ireland’s public discussion of economic issues in the years before and after the demise of the Celtic Tiger.

Julien Mercille has filled an important gap in our understanding not only of how a nation implemented irrational austerity policies, but how media institutions played a central role in ensuring people tolerated them - from distorting and manipulating facts, to shutting out alternative analysis. Mercille shows that austerity is a first and foremost a political policy which requires an uncritical and compliant media.

1. Introduction: 'the most significant changes since World War II’ 2. The crisis and the role of the media 3. The housing bubble 4. Saving the banks 5. The EU-IMF bailout and the default option 6. Austerity, or class warfare 7. Beyond the Eurozone 8. Conclusion