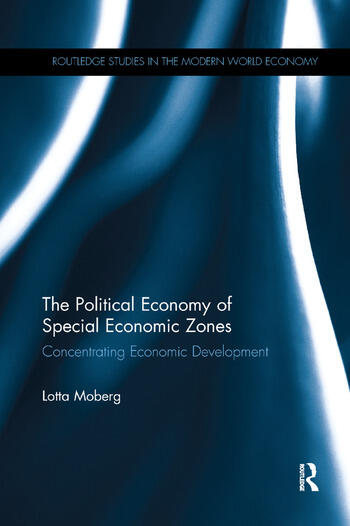 Special Economic Zones (SEZs) have become a popular development policy throughout the world over the last half a century. These zones form designated areas where governments offer businesses lower taxes, tariffs, and often lighter regulations. Generally, SEZs aim to attract investments and raise a country’s export and employment rates, but although success stories are often cited, there are numerous failed projects that have instead become burdens for their host countries.

This book examines SEZs from a political economy perspective, both to dissect the incentives of governments, zone developers, and exporters, and to uncover both the hidden costs and untapped potential of zone policies. Costs include misallocated resources, the encouragement of rent-seeking, and distraction of policy-makers from more effective reforms. However, the zones also have several unappreciated benefits. They can change the politics of a country, by generating a transition from a system of rent-seeking to one of liberalized open markets. In revealing the hidden promise of SEZs, this book shows how the SEZ model of development can succeed in the future.

Applying frameworks from various schools of political economy, this volume places SEZs in the context of their mixed past and promising future. It is essential reading for anyone with an interest in international economics, development economics, and political economy, including practitioners and consultants of SEZ policies.

PART I The theory of zone politics

2 Are SEZs better than the status quo?: Knowledge and incentive problems with SEZs

3 SEZs as drivers of reform

4 SEZs as promoters of liberalization or protectionism

5 The problems of India’s SEZs

9 The changing world of SEZs

‘What do Special Economic Zones actually accomplish? And what are there drawbacks and limitations? Lotta Moberg's The Political Economy of Special Economic Zones mixes theory and empirics to offer the very best available answers to these questions.’ — Tyler Cowen, Professor of Economics, George Mason University, USA

‘While researchers and policymakers constantly aim to unpack the determinants for SEZ success, all the evidence points to the central role of political economy. This book is a critically important contribution to understanding how political economy shapes the outcomes of SEZ programs, and I’m sure it will become a foundational piece in the still-nascent SEZ literature.’ — Thomas Farole, Lead Economist, World Bank Group

‘Lotta Moberg here explains, with a rare combination of sophistication and clarity, the promises and pitfalls of Special Economic Zones. Packing impressive institutional and theoretical knowledge into each page, this study is by far the best single analysis that I’ve read on SEZs. It should - it will - become an instant classic on the subject.’ — Donald J. Boudreaux, Professor of Economics, George Mason University, USA

‘The politics of protection, regulation, and taxation many developing nations into a pattern failure and volatile policy. A solution that many scholars, ranging from Buchanan to Weingast, have proposed is some variant of federalism. But federalism requires fundamental structural changes in governance. Can some of the benefits of competition among jurisdictions be achieved by a less extreme institution? In this literate, scholarly, and persuasive book Lotta Moberg takes a tough but fair-minded look at 'Special Economic Zones.' She examines successes and failures, and puts together a blueprint for nations might succeed, or perhaps just fail less often.  The definitive work on Special Economic Zones in political economy.’ — Michael C. Munger, Director Philosophy, Politics, and Economics Program, Duke University, USA

'Moberg’s analysis, well grounded in public choice theory, steers the conversation away from limited comparisons of observable before-after effects towards an appreciation of the potential of SEZs for inducing long-term institutional change. This is a thoughtful book that I would recommend wholeheartedly, both to specialists in the field as well as to researchers wishing to better understand issues concerning special economic zones.' — Maxim Pinkovskiy

'In countries ranging from Ireland to China, creation of Special Economic Zones set the stage for broad liberalization of business climates – and put their societies on a path to prosperity. In other cases, areas designated as zones have languished and deflected energies from adopting wider reforms. In her masterful analysis of rent-seeking behaviors, Lotta Moberg provides often surprising yet practical insights on ways that the next generation of free economic zones can succeed.' — Mark Frazier, president of Openworld and global advisor on free zones