The Political Representation of Immigrants and Minorities
Voters, Parties and Parliaments in Liberal Democracies 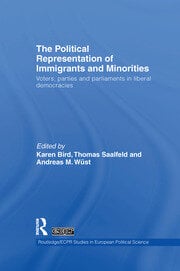 The Political Representation of Immigrants and Minorities: Voters, Parties and Parliaments in Liberal Democracies

In 2005, almost 700,000 immigrants acquired the citizenship of a member state of the European Union; over 600,000 became US citizens; nearly 100,000 became Australians and approximately 200,000 Canadians. 2005 was not an exceptional year. During the past decades, many advanced liberal democracies have become more ethnically diverse societies. This book breaks new ground in the analysis of the political representation of immigrants and visible minorities both theoretically and empirically. It examines the upward trend in migrant and minority representation and demonstrates that there remain crucial differences across liberal democracies in the timing of these developments; in channels of access for minority representatives, in the policy focus and outcomes of minority representation; in the nature of the connections between minority representatives and minority communities, and in the nature of their relationships with constituents at large.

Part I analyses immigrants and visible minorities as voters, who must be the starting point of any analysis of political representation. Part II deals with the stage of candidate selection within political parties, a crucial and under-researched stage in the process of political representation. Part III deals with immigrants and members of visible minorities, once elected to parliament and includes analyses of the Canadian Parliament, the German Bundestag, MPs in the United Kingdom and Members of the United States Congress. The book will of interest to students and scholars of migration and ethnicity studies and political science, especially those with an interest in political representation, democratic institutions, voting behaviour, party organisation, legislative behaviour and comparative politics.

Thomas Saalfeld is Professor of Political Science at the University of Bamberg, Germany.