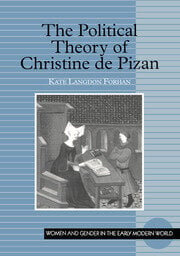 Few medieval or Renaissance political writers, male or female, wrote more works on politics than Christine de Pizan; none of them addressed audiences so varied in class or gender. Yet until now there has been no comprehensive full-length study of Christine de Pizan's political thought. With The Political Theory of Christine de Pizan, Kate Forhan rectifies this oversight, situating de Pizan in the history of political thought while discussing traditional concerns of political theorists, such as justice, obligation, law, equality, and just war. Forhan also addresses the question of whether Pizan's work is original or derivative; whether she is a theorist or "merely" a political writer. Between 1400 and 1429, at a time of great civil strife in France, Christine de Pizan wrote ten books for the instruction and guidance of those engaged in political life. Her theory is focused on a "politics of inclusion," which validates the essential contribution of each member of the body politic to the whole, despite socially and politically mandated difference of class, nationality, and gender-ideas not without significance to the modern era. As Forhan demonstrates through analysis of her work, the thought of Christine de Pizan has true relevance for modern times. First, hers was a society in transition: new class structures, new occupations, and new aspirations were appearing behind the crumbling structures of the late medieval world. Secondly, Christine de Pizan was an outsider; a woman in a world dominated by men, an Italian in France, a member of the "meritocracy" at a court that was rigidly hierarchical. Her "difference" gave her the perspective to observe her society objectively. Her personal vulnerability allowed her to see politics more clearly, as those who are most vulnerable might see our own. Thirdly, she was a shrewd observer in a country that was emerging as a nation-state, where new concepts and practices of law, justice, administration, and politics in general were in the process of development. This book will be of interest to political theorists and political scientists; medieval historians; historians of women and gender; and scholars of comparative literature.

Contents: Chronological list of works and short titles; Descendants of Jean II, King of France; Maps; Alone am I; An introduction to the mirror for princes; The body politic; On kingship; Justice and the law; Peace and just war; Conclusion: the paradox of Christine de Pizan; Selected Bibliography; Index.

’This book gives a new and important perspective on the writings of Christine de Pizan and calls attention to their importance in the times in which she lived, the transition between the Middle Ages and the Renaissance.’ Charity Willard, author of Christine de Pizan: Her Life and Works ’This timely and impressive book provides a much-needed study of Christine de Pizan’s political works, a relatively neglected area of her literary output. The chief virtue of Forhan’s approach is to combine insightful analysis of Christine’s contribution to medieval debates with careful contextualisation of her works in relation to both the traditional authorities’ and her own contemporaries’ writing on these issues ... will be read with much profit and enjoyment by political theorists and Christine specialists alike.’ Dr Rosalind Brown-Grant, Senior Lecturer in French, University of Leeds ’With this thoughtful, elegant work Kate Forhan establishes herself as one of the foremost interpreters of Christine de Pizan in the English-speaking world. Forhan brings the conceptual acuity of political theory and the graceful insight of the best of literary studies to this task. A first rate work.’ Jean Bethke Elshtain, Laura Spelman Rockefeller Professor of Social and Political Ethics, University of Chicago, and author of Who Are We? Critical Reflections, Hopeful Possibilities '... a valuable addition to the field of medieval studies... an excellent introductory text for students new to the field and to Christine's works.' Choice '... Kate Forhan is the leading specialist in the United States on Christine de Pizan's political writing... an extremely important and highly readable introduction to a most difficult subject. It clearly and capably contextualizes Christine's politics within her own time while synthesizing valid parallels with modern political theory. I would strongly recommend this book for any intellectual history course as well as those in women's hist