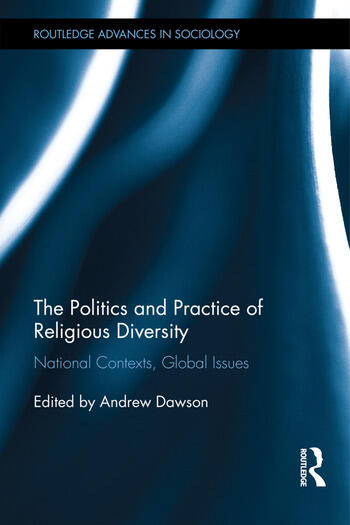 The Politics and Practice of Religious Diversity engages with one of the most characteristic features of modern society. An increasingly prominent and potentially contentious phenomenon, religious diversity is intimately associated with contemporary issues such as migration, human rights, social cohesion, socio-cultural pluralisation, political jurisdiction, globalisation, and reactionary belief systems.

This edited collection of specially-commissioned chapters provides an unrivalled geographical coverage and multidisciplinary treatment of the socio-political processes and institutional practices provoked by, and associated with, religious diversity. Alongside chapters treating religious diversity in the ‘BRIC’ countries of Brazil, Russia, India and China, are contributions which discuss Australia, Finland, Mexico, South Africa, the UK, and the United States.

This book provides an accessible, distinctive and timely treatment of a topic which is inextricably linked with modern society’s progressively diverse and global trajectory. Written and structured as an accessible volume for the student reader, this book is of immediate interest to both academics and laypersons working in mainstream and political sociology, sociology of religion, human geography, politics, area studies, migration studies and religious studies.

Andrew Dawson is Professor of Modern Religion in the Department of Politics, Philosophy and Religion at Lancaster University, UK. He researches the relations between modern society and religion. His recent publications include: (as author) Sociology of Religion (2011) and Santo Daime: A New World Religion (2013); (as editor) Summoning the Spirits (2011).