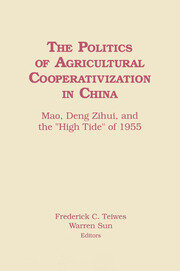 The decision to initiate a High Tide of agricultural co-operativisation in 1955 in China, is documented in this text. The social impact, policy conflict and leadership style of Mao is detailed, drawing upon documentary sources, interviews with Party historians, and a chronology of events.

The conveners (the editors of this book) of the September 1989 Four Anniversaries China Conference in Annapolis, asked the contributors to look back from that point in time to consider four major events in modern Chinese history in the perspective of the rapid changes that were shaping the Chinese society, economy, polity, and sense of place in the world in the 1980s, a time when China was making rapid strides toward becoming more integrated with the outside world. With contributions by distinguished scholars in the field, the four anniversaries considered are the High Qing, the May Fourth Movement, forty years of communism in China, and ten years of the Deng era.