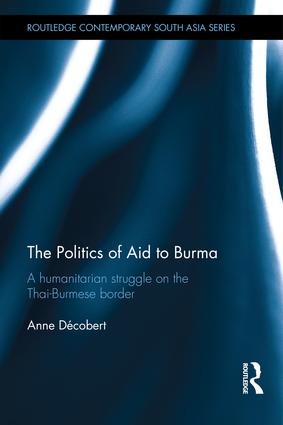 The Politics of Aid to Burma

A Humanitarian Struggle on the Thai-Burmese Border, 1st Edition

For over sixty years, conflict between state forces and armed ethnic groups was ongoing in parts of the borderlands of Burma. Ethnic minority communities were subjected to systematic and widespread abuses by an increasingly complex patchwork of armed state and non-state actors. Populations in more remote and disputed border areas typically had little to no access to even basic healthcare and education services. As part of its counter-insurgency campaign, the military state also historically restricted international humanitarian access to civilian populations in unstable border areas. It was in this context that "cross-border aid" to Burma had developed, as an alternative mechanism for channelling assistance to populations denied aid through more conventional systems. Yet by the late 2000s, national and international changes had significant impacts on an aid debate, which had important political and ethical implications.

Through an ethnographic study of a cross-border aid organisation working on the Thailand-Burma border, this book focuses on the political and ethical dilemmas of "humanitarian government". It explores the ways in which aid systems come to be defined as legitimate or illegitimate, humanitarian or "un-humanitarian", in an international context that has witnessed the multiplication of often-conflicting humanitarian systems and models. It examines how an "embodied history" of violence can shape the worldviews and actions of local humanitarian actors, as well as institutions created to mitigate human suffering. It goes on to look at the complex and often-invisible webs of local organisations, international NGOs, donors, armed groups and other actors, which can develop in a cross-border and extra-legal context – a context where competing constructions of systems as legitimate or illegitimate are highlighted.

Exploring the history of humanitarianism from the local aid perspective of Burma, this book will be of interest to students and scholars of Southeast Asian Studies, Anthropology of Humanitarian Aid and Development Studies.

'Décobert does justice to the people she encountered during her research… Décobert’s book deserves a broad readership inside Burma not just because it provides detailed background to the humanitarian struggles along the eastern border, applicable now to providing aid to displaced civilians in the north, but as international donor priorities shift from humanitarian support to development and peace-building initiatives.'

'Décobert provides a sound and insightful description of the microcosm of the border, and sheds light on the experiences and beliefs underlying cross-border operations through the testimonies of health workers. In this sense, the book provides a very valuable account of a place where so many Myanmar migrants and refugees, but also international aid workers, strive to cope with the human and material costs of armed conflict… The Politics of Aid to Burma is a well-documented testimony of the country's civil society situation along the border…'

Introduction: An Ethnography of the Back Pack Health Worker Team’s "Cross-Border Aid" 1. Humanitarianism, Victims and Politics: conceptual debates and approaches 2. From Burma to the Border: historical and political background to the debate around cross-border aid 3. The Back Pack Health Worker Team, Product of Burma’s "Chronic Emergency" 4. Doing our Duty: Back Pack medics and the multi-ethnic victim 5. Back Pack is Something, Back Pack is Nothing 6. International Legitimacy for a "Humanitarian Struggle" 7. Beyond Burma: finding a place in a future Myanmar Conclusion: The Politics of Humanitarian Aid—politics of life and politics of value

Anne Decobert is an anthropologist and development professional who has worked with local and international organisations in Southeast Asia since 2007. Her research interests include: the politics of humanitarian aid, applied anthropology and participatory development, and public health in developing and emergency contexts.