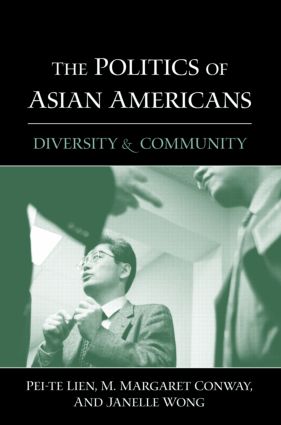 The Politics of Asian Americans

Through the perspectives of mass politics, this book challenges popular misconceptions about Asian Americans as politically apathetic, disloyal, fragmented, unsophisticated and inscrutable by showcasing results of the 2000-01 Multi City Asian American Political Survey.

"This is an important piece of work that will be widely read and cited among academic political scientists as well as by journalists, activists, and political practitioners." -- Jane Junn, Rutgers University

"This volume is a significant contribution to the study of Asian American politics in the U.S. -- perhaps the most significant so far in a small but rapidly growing literature. It provides a treasure trove of detail on the political attitudes, opinions and behavior of Asian-Americans in the U.S. Based on the single-best source -- the recent MAAP five city, six national-origin group study--this book will be a key reference point for those interested in Asian-American, immigrant and ethnic politics in the United States." -- Michael Jones-Correa, Cornell University