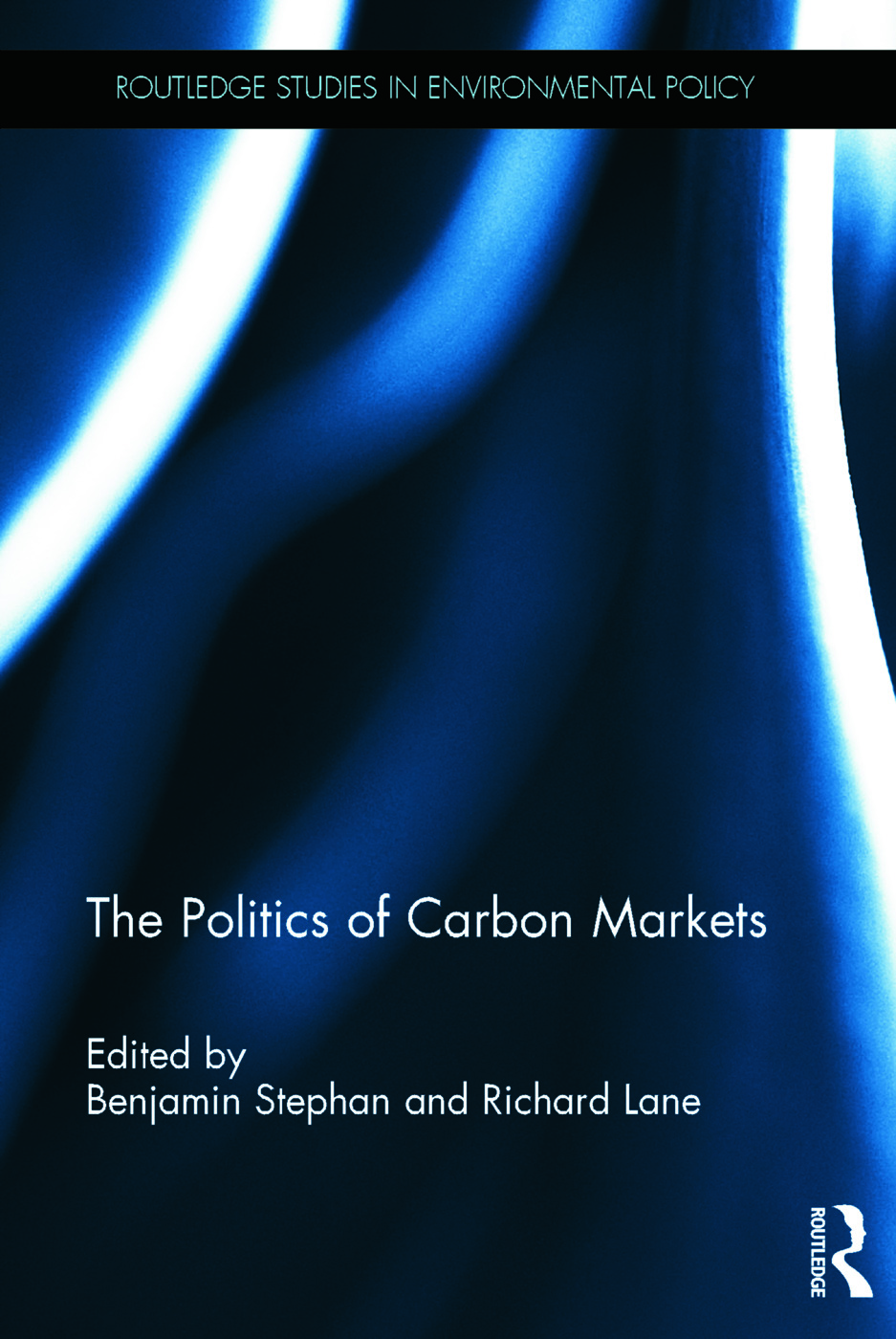 The Politics of Carbon Markets

The carbon markets are in the middle of a fundamental crisis - a crisis marked by collapsing prices, fleeing actors, and ever increasing greenhouse gas levels. Yet carbon trading remains at the heart of global attempts to respond to climate change. Not only this, but markets continue to proliferate - particularly in the Global South.

The Politics of Carbon Markets

helps to make sense of this paradox and brings two urgently needed insights to the analysis of carbon markets. First, the markets must be understood in relation to the politics involved in their development, maintenance and opposition. Second, this politics is multiform and pervasive. Implementation of new techniques and measuring tools, policy development and contestation, and the structuring context of institutional settings and macro-social forces all involve a variety of political actors and create new forms of political agency. The contributions study the total extent of the carbon markets, from their prehistory to their contemporary expansion and wider impacts.

This wide-ranging political perspective on the carbon markets is invaluable to those studying and interested in ecological markets, climate change governance and environmental politics.

The Politics of Carbon Markets offers an enlivening antidote to carbon market fatigue. The assembled articles avoid moribund debates between proponents and opponents of carbon trading by anchoring carbon markets in the broader concerns of environmental politics; and not a politics of governments and policy instruments, but a postfoundational "lively politics," which interrogates questions of nature, culture and power. Benjamin Stephan and Richard Lane’s edited volume is a must read for those seeking to understand the past, present, and future politics of carbon.

Can carbon markets be part of the solution to global climate change, including in the global South? Can they make development more sustainable as well as reduce emissions? This edited volume takes a historical perspective on the evolution of carbon markets, mainly in the North. With close analysis of the political construction of markets, the volume offers food for thought for those who want to understand how it might evolve in developing countries in future.

Carbon markets have long been understood to be exacerbating the very climate crisis they were supposed to help address. What is less understood is why they stagger on regardless. This timely volume greatly illuminates the deep politics of these so-called "zombies" and of the zombie scholarship that sometimes accompanies them. In so doing, it lends welcome empirical substance to the study of that more encompassing zombie phenomenon known as neoliberalism.

1. Zombie markets or zombie analyses? Revivifying the politics of carbon markets Richard Lane and Benjamin Stephan Part 1: The politics of carbon before carbon 2. Resources For the Future, resources for growth: the making of the 1975 growth ban Richard Lane 3. Politics by other means. The making of the emissions trading instrument as a 'pre-history' of carbon trading Arno Simons and Jan-Peter Voß 4. Allometric equations and timber markets: an important forerunner of REDD+? Heather Lovell and Donald MacKenzie 5. Virtuous Carbon Matthew Paterson and Johannes Stripple Part 2: The Politics of Carbon 6. A Neo-Gramscian Account of Carbon Markets: The Cases of the European Union Emissions Trading Scheme and the Clean Development Mechanism Elah Matt and Chukwumerije Okereke 7. The politics of carbon markets in the global South Markus Lederer 8. Carbon governance in China by the creation of a carbon market Anita Engels, Tianbao Qin and Eva Sternfeld 9. The currencies of carbon: carbon money and its social meaning Philippe Descheneau Part 3: The politics of carbon after carbon 10. The Politics of Researching Carbon Trading in Australia Clive L. Spash 11. Dialogue of the Deaf? The CDM's Legimitation Crisis Peter Newell 12. The Post- and Future Politics of Green Economy and REDD+ Kathleen McAfee 13. Political sellout! Carbon markets between depoliticising and repoliticising climate politics Chris Methmann and Benjamin Stephan

Benjamin Stephan is a postdoctoral researcher at the Centre for Globalisation and Governance, Hamburg University, Germany.

Richard Lane is a PhD researcher at the Centre for Global Political Economy, University of Sussex, UK.