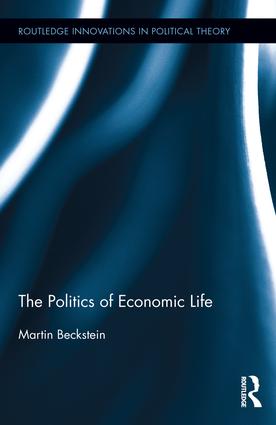 The Politics of Economic Life

In recent years, economic life has become increasingly politicized: now, every company has a ‘philosophy’, promising its customers some ethical surplus in return for buying their products; consumers shop for change; workers engage in individualized forms of employee activism such as whistleblowing; and governments contribute to the re-configuration of the economic sphere as a site of political contestation by reminding corporate and private economic actors of their duty to ‘do their bit’.

The Politics of Economic Life addresses this trend by exploring the ways in which practices of consumption, work, production, and entrepreneurship are imbued with political strategy and ideology, and assesses the potentials and perils of the politicization of economic activity for democracy in the 21st century.

"This is a highly interesting, original, and intelligently written study. Martin Beckstein has utilized some of the latest cutting-edge analyses in political and social theory to reinterpret fundamental economic practices and categories. The book ranges widely across economic practices with a critical eye and teases out intentional and hidden political significance embodied in them. By combining sophisticated theory with often entertaining examples, Beckstein contrives to make the book both challenging and very readable." —Michael Freeden, The University of Nottingham, UK

"The economic colonization of society and politics has been one of the great themes of modern social theory. Martin Beckstein reverses this perspective, asking how far in today's world everyday economic practices such as consumption or work may contain the potential for new forms of democratic political expression and contestation. Based on a micro-political approach emphasizing the view "from below" and on numerous examples richly illustrating his argument Beckstein makes an important contribution to a subject that has not so far received sufficient attention."—Roland Kley, University of St. Gallen, Switzerland

1. The Politicization of Economic Activity 2. Towards a Micro-Political Approach to Economic Life 3. The Marketplace as a Site of Politics 4. Work and the World of Micropolitics 5. Shopping for Change? 6. Political (By-)Products of Economic Production 7. Entrepreneurial Space Production 8. Faraway, So Close

Martin Beckstein is Postdoctoral Assistant for Political Theory at the University of Zurich.